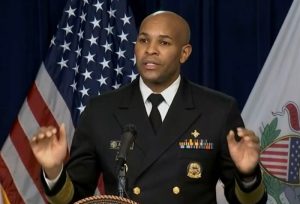 SPRINGFIELD – The top public health official in the United States said Tuesday, Dec. 22 that the COVID-19 trends in Illinois are improving and he urged the public to get vaccinated as soon as the doses become available to them.

“The numbers here in Illinois are moving in the right direction and we have a finish line in sight with these two vaccines,” U.S. Surgeon General Dr. Jerome Adams said during a news conference in Chicago.

Adams was referring to the vaccines that were recently granted Emergency Use Authorization by the U.S. Food and Drug Administration, one developed by the drug companies Pfizer and BioNTech, and another by Moderna. The state began distributing the Pfizer vaccine last week and expects to begin shipping the Moderna vaccine this week.

The major difference between the two vaccines is that the Pfizer vaccine must be stored at an ultra-low temperature of 80 below zero, whereas the Moderna vaccine can be stored at temperatures up to 20 below zero. Both have been shown to be 94 to 95 percent effective in preventing people from developing COVID-19 symptoms.

But while people are waiting for their turn to receive the vaccine, Adams urged people to continue following public health guidelines – wearing face masks in public, frequently washing hands and wiping down surfaces and avoiding large gatherings.

“We can’t let fatigue let us make poor decisions this holiday season that end up making us backtrack, especially when we are so incredibly close to getting ourselves and everyone else across the finish line,” he said.

The Illinois Department of Public Health reported Tuesday, Dec. 22 that 6,239 new confirmed or probable cases had been diagnosed over the previous 24 hours out of 84,764 tests performed. That lowered the state’s seven-day rolling average case positivity rate to 7.4 percent, marking the third consecutive day the number was below 8 percent.

IDPH also reported 116 additional deaths over the previous 24 hours, bringing the total number of fatalities in Illinois since the pandemic began to 15,414. There have now been 911,308 cases of the disease in the state out of more than 12.6 million tests performed.

Earlier in the day, a panel of state lawmakers received a briefing on the state’s vaccination plan where they were told the state expects to receive enough vaccines by the end of the month to vaccinate all of its front-line health care workers and more than a quarter of all the residents and staff of long-term care facilities.

Those are the population groups categorized as 1A in the state’s Vaccination Planning Guide, the first people in line for the vaccine.

Andrew Friend, IDPH deputy director for the Office of Preparedness and Response, said that as of Saturday, Dec. 19, the state had received more than 109,000 doses of the Pfizer vaccine. That included 23,328 doses that were shipped directly to Chicago and 85,800 for the rest of the state.

All of those doses were distributed to hospitals, either through Regional Hospital Coordinating Centers or directly to hospitals that have the equipment to store the vaccine at ultra-low temperatures. Outside of Chicago, they were focused in the 50 counties with the highest death rates per-capita from COVID-19.

Friend estimated it would take four to six weeks to vaccinate all the 1A individuals who agree to get the vaccine. The next group, 1B, will include people age 75 and older and front-line essential workers outside of the health care industry.

After that, he said, will come group 1C, which includes people age 65 to 74 as well as people age 16-64 who have other health issues such as heart or lung disease that put them at high risk of developing serious complications from COVID-19.

Friend emphasized, however, that the length of time it takes to move through those groups will depend on several factors such as how many shipments the state actually receives and the “uptake rate” – the percentage of people within each category who elect to get the vaccine.

In Chicago, Surgeon General Adams acknowledged that many people might be skeptical or have questions about the vaccine, but he encouraged people understand the facts.

Second wave of COVID-19 shows signs of abating in Illinois