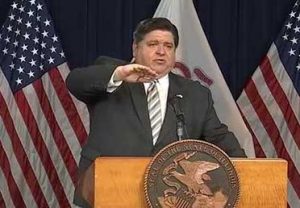 Gov. J.B. Pritzker tells reporters during a news conference Monday, Nov. 9 in Chicago that the COVID-19 situation in the northwest region of Illinois is impacted by sharing borders with Iowa and Wisconsin, states where positivity rates are higher. (Facebook photo)

SPRINGFIELD – Gov. J.B. Pritzker announced Monday, Nov. 9 that three more regions of the state will be placed under even stricter COVID-19 restrictions as the state’s rates of infections and hospitalizations continue to climb.

“The virus is winning the war right now,” Pritzker said during his daily COVID-19 briefing in Chicago.

Ten of the state’s 11 regions are under Tier 1 mitigations, which include the closing of bars and restaurants to indoor service and limiting the size of public gatherings to 25 or fewer, among other measures.

A full list of the mitigation measures in place in each region is available on the Department of Commerce and Economic Opportunity’s website.

Pritzker said the latest actions are being taken because of rising test positivity rates in each of the regions. In Region 5, according to the most recent data on the Illinois Department of Public Health’s website, the seven-day rolling average positivity rate stood at 11.5 percent on Saturday, Nov. 6, while Region 7 posted a 16.4 percent rate and Region 8 stood at 13.7 percent.

Each of those regions has been under Tier 1 mitigations for more than two weeks. Region 5 was placed under those restrictions Oct. 22, while Regions 7 and 8 followed on Oct. 23.

But those measures so far have failed to bring down the rate of infections in those areas, and Pritzker put the responsibility for that on local officials.

“Some elected leaders are allowing this continued rise in positivity to balloon out of control while taking no action,” he said. “These mayors and city councils and county boards and state’s attorneys need to take some responsibility for keeping their constituents safe. I promise them that responsibility pales in comparison to what could come when the hospitals in your area are filling up and there aren’t enough nurses or doctors to save their constituents’ lives.”

In addition to the three regions where Tier 2 mitigations were announced Monday, two other regions appear to be headed in the same direction, according to IDPH data. Those include Region 2, which includes Peoria, the Quad Cities and several surrounding counties, and Region 3, which includes Springfield, Quincy and other areas of west-central Illinois.

A spokeswoman for Pritzker said in an email that the administration typically waits two to three weeks before moving a region into a higher tier of mitigation.

All of Illinois has been on an upward trajectory of COVID-19 infections since early August. During his briefing, Pritzker noted the average number of new cases reported daily in Illinois has jumped 380 percent since Oct. 1, while the positivity rate has climbed 180 percent and both hospitalizations and deaths per day are up 150 percent.

From Saturday through Monday, IDPH reported a total of 33,020 new confirmed and probable cases — an average of just over 11,000 per day — and 132 virus-related deaths. The preliminary seven-day rolling average positivity rate stood at 11.4 percent.

That pushed the statewide totals since the pandemic began to 498,560 cases, and 10,210 deaths. Given the current rate of spread, Illinois will likely surpass half a million total cases on Tuesday, Nov. 10.

As of late Nov. 9, 4,409 people in Illinois were reported hospitalized with COVID-19.  Of those, 857 patients were in intensive care units and 376 of those patients were on ventilators.