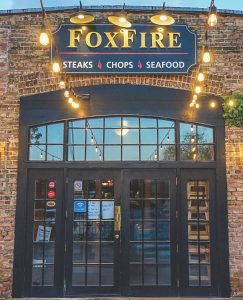 FoxFire in Geneva filed a lawsuit in response to restrictions imposed last month in Region 8, which includes Kane and DuPage counties. Those restrictions include banning indoor service at bars and restaurants, and limiting capacity of gatherings to the lesser of 25 people or 25 percent of maximum occupancy. (Photo courtesy of FoxFire)

SPRINGFIELD – An appeals court has handed down a favorable ruling to Gov. J.B. Pritzker in a legal challenge to his administration’s restrictions on bars and restaurants to curb the spread of COVID-19.

The state court on Friday, Nov. 6 decided that Pritzker has the power under state law to issue successive disaster proclamations.

In an email, Kevin Nelson, one of FoxFire’s attorneys, said his client plans to appeal the ruling to the Illinois Supreme Court, which could accept or decline to hear the case.

“It is obvious to say that FoxFire is disappointed with the appellate court’s decision. Unfortunately, the 2nd District has decided to play politics rather than applying the statute. This case is about separation of powers, which the appellate court has missed completely. Instead, the justice authoring the opinion misstates law and fact,” Nelson wrote in an email. “Needless to say, FoxFire will file their appeal to the Supreme Court of Illinois where they hope justice will be served — against the governor’s overreach and for the ability of a local restaurant to continue to pursue its calling, safely.”

A spokesperson for the Illinois Attorney General’s Office, which represents Pritzker and the state Department of Public Health, said they are pleased with the decision.

However, the appellate court’s order was issued under Supreme Court Rule 23 — which means the order cannot be cited as precedent in other cases, with limited exceptions, and applies only to this case.

The court dissolved the temporary restraining order and sent the case back to Kane County for “further proceedings consistent with this decision.”

FoxFire filed a lawsuit in response to restrictions imposed last month in Region 8, which includes Kane and DuPage counties. Those restrictions, referred to as Tier 1 mitigations, include banning indoor service at bars and restaurants, and limiting capacity of gatherings to the lesser of 25 people or 25 percent of maximum occupancy.

On Monday, Pritzker announced that Region 8 will face Tier 2 mitigations, beginning on Wednesday, Nov. 11, as a result of the area’s worsening COVID-19 test positivity rate over the past two weeks. Tier 2 mitigations impose a gathering cap of 10 individuals, rather than 25, and table caps of six rather than 10, when eating outside.

FoxFire’s owners argued the state’s prohibition on bars and restaurants from having indoor dining could not be enforced because the state Emergency Management Agency Act only gives the governor the authority to issue a single 30-day disaster proclamation.

The owners also maintained that business closures enforced by the state must comply with the guidelines mandated under the state’s Department of Public Health Act, and they claimed these guidelines were ignored.

In reversing Busch’s ruling, the appellate court found “that nothing in (the Emergency Management Agency Act’s) language precludes the governor from issuing multiple disaster proclamations — each with its own 30-day grant of emergency powers — arising from one ongoing disaster,” according to the court’s 17-page order.

The appellate court also referenced laws passed by the Illinois General Assembly during the spring session regarding the Illinois Emergency Management Agency Act.

According to the court, “in addition to the clear language of the (IEMAA), these statutes all confirm our conclusion that the Legislature intended to allow the governor to issue successive disaster proclamations stemming from an ongoing disaster.”

The appellate court also rejected the argument that restrictions imposed on businesses related to COVID-19 must follow the Illinois Department of Public Health Act’s quarantine and closure guidelines.

Pritzker’s latest executive order did not impact the IDPHA “because it did not reference quarantine orders, isolation orders, or the business closure orders,” the court wrote in its decision.