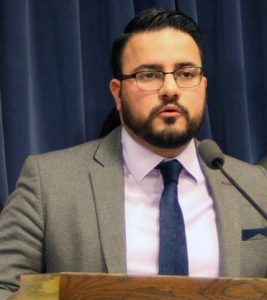 SPRINGFIELD – U.S. Rep. Jesus “Chuy” Garcia will not serve as a presidential elector in Illinois. Instead, he is being replaced by state Sen. Omar Aquino, the state Democratic Party confirmed, and the reason has to do with a requirement of the U.S. Constitution.

Garcia was selected to serve as an elector when the Democratic Party of Illinois’ state central committee met in July. He was even listed on a press release the party sent out July 15.

Capitol News Illinois used that list for a story first distributed on Wednesday, Nov. 18 and also confirmed with a party spokesperson that the names and descriptions were accurate.

But soon after the story was first published, Freeport High School civics teacher Jim Winker emailed CNI to point out that there must have been a mistake. And, indeed there was.

That’s because Article II, Section 1 of the U.S. Constitution, which gives states authority to decide how their presidential electors will be chosen, also places one specific limit on who can serve: “no Senator or Representative, or Person holding an Office of Trust or Profit under the United States, shall be appointed an Elector.”

The entire electoral college system has been the subject of considerable controversy in recent years. It was primarily responsible for George W. Bush winning the presidency in 2000, and Donald Trump winning in 2016, despite the fact that both had lost the popular vote.

There have been three other instances when the elected president failed to win the popular vote, including the election of 1876, when the Electoral College chose Republican Rutherford B. Hayes over Democrat Samuel J. Tilden as part of a compromise that brought about the end of Reconstruction.

Many historians say that the Electoral College itself was part of a compromise by the framers of the Constitution, some of whom feared that a chief executive directly elected by the people could lead to despotism. In 1789, when the Constitution was written, no other country chose their heads of government through direct popular elections.

Others at the time, however, objected to Congress having any role in choosing a president because they wanted a clear separation of powers between the executive and legislative branches.

Jason Mazzone, who teaches constitutional law at the University of Illinois Urbana-Champaign College of Law, said the ban on members of Congress serving as electors was meant as an additional check to prevent the office of president from becoming too much like a prime minister.

“It preserves the Article II branch as a distinct branch of government in a system in which we don’t elect the president directly,” he said in an email. “If you don’t want citizens voting directly for the President then you have to give the vote to somebody else. If you give it to members of Congress then you are very close to the parliamentary system that was otherwise rejected.”

A spokeswoman for the state Democratic Party did not immediately respond to questions about why Garcia was initially placed on the slate of electors but she acknowledged Thursday that he had been replaced by Aquino.

The list of electors still has not been officially submitted to the Illinois Secretary of State’s office. A spokesman there said that is expected to happen “on or about” Dec. 4, the day final election results statewide are certified.