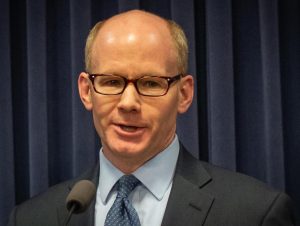 Sen. Don Harmon speaks to the media Jan. 20 at the Capitol in Springfield after being named president of the Senate. Harmon is the leader of the Democratic electoral slate in Illinois this year. The state’s 20 electors are scheduled to meet Dec. 14 at the Capitol. (Capitol News Illinois file photo)

SPRINGFIELD – Plans are being developed in Illinois for the state’s Electoral College delegates to meet in Springfield on Dec. 14, but they are being complicated by the worsening COVID-19 pandemic as well as President Donald Trump’s refusal so far to concede the election.

A spokesman for Secretary of State Jesse White said Wednesday, Nov. 18 that the ceremony, which normally draws little public attention, has traditionally been held in the Statehouse. But with the entire state now under enhanced mitigation measures to prevent the spread of the disease, officials are searching for a room, or possibly another venue, that would allow enough social distancing for the state’s 20 electors, the media and the public to remain safe.

The electoral college system is spelled out in Article I of the United States Constitution. It provides that each state receives the same number of electoral votes as it has in the U.S. House and Senate. Since Illinois has two U.S. senators and 18 representatives, it gets 20 electoral votes.

Originally, the candidate receiving a majority of the electoral votes became president and the second-place candidate became vice president. But that was changed in 1804 with adoption of the 12th Amendment to the U.S. Constitution, which provides that the president and vice president are elected in separate ballots. Since then, candidates for both offices have run on a single-party ticket.

The process was amended again in 1961 by the 23rd Amendment, which gives the District of Columbia the same number of electoral votes it would otherwise have if it were a state.

The Constitution also provides that each state will determine for themselves how their electors are chosen and allocated among the candidates. Today, most states, including Illinois, operate under a “winner-take-all” system, meaning the candidates with the most popular votes receive all of the state’s electoral votes.

The two exceptions are Maine and Nebraska, which award the two votes representing their U.S. Senate seats to the popular vote winner, but the others are awarded to the winner within each congressional district.

By federal statute, every state’s electoral college is required to meet on the first Monday after the second Wednesday in December, which this year falls on Dec. 14.

In Illinois, state law requires the electors to meet at 10 a.m. that day, “in a room to be designated by the Secretary (of State) in the Capitol at Springfield in this State.”

During that meeting, Secretary of State Jesse White will call the meeting to order and call the roll. The electors then will choose a chairperson to preside over the remainder of the meeting, which consists only of marking their ballots for president and vice president and counting the results.

Those results are a foregone conclusion because preliminary returns show that Democrats Joseph R. Biden and Kamala Harris won the popular vote in Illinois by more than a 16-point margin, although the official results won’t be certified until Dec. 4.

State law also provides that each political party designate in advance of the election the electors who will serve, should their party win, either by a state party convention or a meeting of the party’s state central committee. This year, both major parties in Illinois named their electors during central committee meetings that were held in July.

The Democratic electoral slate in Illinois this year is led by Illinois Senate President Don Harmon, of Oak Park, and Chicago Mayor Lori Lightfoot, the two at-large electors who represent the state’s two U.S. Senate votes. The other 18 electors, representing the state’s 18 congressional districts, are primarily state central committee members from those districts. They include:

And while their official duties are limited solely to casting their ballots on Dec. 14, several have already gotten involved in trying to expedite the transition to a new presidential administration.

Although independent news media have already called the race for Biden and Harris, the Trump campaign has so far refused to concede and the Trump administration has refused to initiate a transition process.

But that hasn’t happened yet, and as a result several members of the Illinois Electoral College wrote to the head of the U.S. General Services Administration Nov. 13, urging her to recognize Biden and Harris as the apparent winners of the election in order to expedite the transition process.