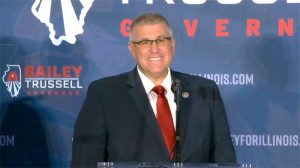 As of about 9 p.m. Tuesday, Bailey had carried over 55 percent of the GOP vote from a field of six candidates, while tallies were unofficial.

“Tonight our movement sent a clear message to the establishment and the political elites: We will not be ignored,” Bailey said in a victory speech just before 9 p.m.

Bailey, a farmer from downstate Xenia, gained the endorsement of former President Donald Trump over the weekend. He surged late in the race behind at least $17 million in funding – either directly to his campaign fund or to political action committees attacking his opponent – from Republican megadonor and shipping supply magnate Richard Uihlein.

Aurora Mayor Richard Irvin, the early frontrunner in the race who received $50 million from another GOP megadonor, Citadel founder Ken Griffin, conceded at about 8:25 p.m.

The battle of billionaire benefactors which ended in Bailey’s nomination drew national attention, largely because a campaign committee that has received funding from Pritzker – the Democratic Governors Association – spent approximately $26 million to influence the Republican primary, largely on ads attacking Irvin and emphasizing Bailey’s conservative record.

The Irvin campaign pegged the total anti-Irvin or pro-Bailey spending by Democrats at about $36 million, with Pritzker’s campaign spending $6.5 million and the Democratic Party of Illinois spending $3.6 million.

In a Tuesday night concession speech, Irvin wished Bailey well, later saying, “the Republican Party must be a party of policies, not personalities.”

“You know, our background, our record and our message were so compelling, so overwhelmingly likely to prevail in November, J.B. Pritzker and the Democratic Party spent the most amount of money in the history … meddling in a Republican primary to take us down,” said Irvin, a combat veteran who would have been the first Black candidate for Illinois governor from either major political party.

As the tides shifted toward Bailey in recent weeks, Irvin adopted a new line of attack, repeatedly saying “a vote for Darren Bailey is a vote for J.B. Pritzker,” arguing that the governor put his dollars behind Bailey because he judged him as the weakest candidate. 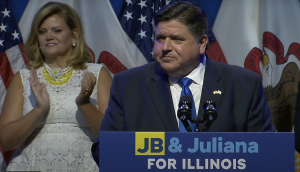 Bailey earlier in the campaign didn’t disagree with the take that Pritzker viewed him as a weak candidate, but he warned Pritzker to “be careful what you wish for.” He has stated his intent to reshape the state’s GOP as a more conservative entity, including by endorsing primary challengers of incumbent Republican state lawmakers.

“We’re all here because we know that Illinois is in trouble,” Bailey said Tuesday night. “Decade after decade of mismanagement in Springfield. Back-to-back billionaire governors who don’t understand the struggles of working people. And where has that gotten us? Nowhere.”

Jesse Sullivan, a Petersburg venture capitalist who along with Irvin was carrying about 15 percent of the GOP primary vote as of 9 p.m. said he called Bailey Tuesday night to say he was glad to lose to a man of faith.

“Now it’s all of our job to get behind Darren and make sure that we go and try to beat J.B. Pritzker,” he said.

Bailey’s nomination sets up a general election contest pitting Pritzker’s progressive track record against a candidate who is far to the right of previous leaders of the state’s Republican party.

Pritzker, meanwhile, has touted Illinois’ firmer fiscal footing since he became governor, pointing to a $1 billion contribution to the state’s “rainy day” fund, an added $500 million pension payment beyond statutory levels and about $900 million spent to pay down other interest-accruing health insurance debts.

“Four years ago I told you that we’d reverse the fiscal damage that Bruce Rauner did to this state that I would end his hostage taking of the budget, reverse his credit downgrades and improve our state’s finances,” Pritzker said in a Tuesday night speech that concluded just before 10 p.m. “Today we’ve had four balanced budgets in four years. We put a billion dollars in the state’s rainy day fund. We reduced our state’s pension liability and now we’ve received six credit upgrades.”

Bailey is expected to continue his criticism of Pritzker over the issues of rising crime, high taxes and support for law enforcement, while abortion rights will also be a central issue.

During his first term, Pritzker signed a sweeping abortion rights bill, the Reproductive Health Act, as well as legislation repealing a law requiring abortion providers to notify the parents of a minor child seeking an abortion.

He is also calling a special session of the General Assembly in the coming weeks to focus on legislation protecting access to abortion, a move he announced moments after the U.S. Supreme Court released a decision overturning the landmark 1973 ruling in Roe vs. Wade.

On Tuesday night, the governor led his supporters in a chant of “we will not go back.”

Bailey, by contrast, is a conservative who opposes abortion rights and has been endorsed by some of the state’s most prominent anti-abortion groups.

The pair’s previous disagreements on pandemic response and executive authority will also likely play a role in the campaign, as will Bailey’s endorsement from Trump and nationwide rising inflation and gas prices.

He also gave a window into the line of attack he’d employ in the coming months against the candidate that his dollars helped to propagate in the primary.

“A few days ago, Donald Trump came to our state and he did what he does best – spew bile on the ground and hope that it takes root in our soil. And proudly standing by his side was the Republican nominee for governor of Illinois, Darren Bailey,” Pritzker said. “Let me be clear, someone who seeks out and accepts the endorsement of a racist misogynistic, homophobic, xenophobic, twice impeached former president does not deserve to come anywhere near the state’s highest office.”

Pritzker had a nominal primary challenger in Chicago area nurse Beverly Miles, but that race was called in Pritzker’s favor about a half hour after polls closed with Pritzker carrying over 90 percent of the vote unofficially.