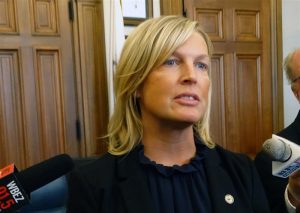 SPRINGFIELD – State Rep. Tony McCombie said Wednesday, Nov. 16 that her top priority when she becomes the next House minority leader will be to rebuild the GOP caucus following last week’s elections that were, for Republicans, a disappointment.

“The top priority is to bring balance to the Republican Party,” she told reporters during her first Statehouse news conference since being elected leader. “I mean, we need some numbers, seriously. We need to collaborate on our messages. We need to bring our caucus all together to have opinions.”

McCombie said Republicans in Illinois must hone their message to appeal to more voters.

“Well, I think we need to have a message, right,” she said. “We’re starting a message right now — you’ve just elected the first female Republican House leader. I think that should show folks across the state that we are inclusive, we are diverse, and we are welcoming all people to come in.”

McCombie, from Savanna in northwest Illinois, was named the new GOP leader Nov. 15 after the caucus’ current leader, Rep. Jim Durkin of Western Springs announced he would not seek another term in that office following last week’s elections.

McCombie previously served as mayor of Savanna and was first elected state representative in 2016, defeating incumbent Democrat Mike Smiddy for the seat in the Quad Cities area. She easily won reelection in 2018 and 2020 and ran unopposed this year.

During the 2019-2020 election cycle, she served as chair of the House Republican Organization, which raises money and coordinates a statewide campaign to elect GOP House members.

Even before the 2022 elections, Republicans were in a 73-45 super minority in the House. Unofficial returns so far show they lost at least four of those seats, with one race still too close to call as of Wednesday.

With those kinds of numbers, McCombie said, it will be important to work collaboratively with Democrats if Republicans hope to achieve any of their priorities.

“I’m going to do what I do now,” she said. “I have friends on both sides of the aisle. I work to develop relationships and friendships, and you all may not know me, but I’m very honest and transparent. And I’ll continue that kind of conversation with the folks across the aisle.”

As one who is known for being more conservative than Durkin, McCombie said she will seek to moderate policies in the state that she says have been driven by the left wing of the Democratic Party.

“Here’s the thing. In Illinois, it’s not about being pro-life or pro-gun. In Illinois, we continue to push the extremes. And maybe that message wasn’t apparent,” she said. “But there would be, in my opinion, no pro-choice Republicans that would vote to repeal parental notification, that would allow abortions up to nine months. So I think that’s what we need to talk about in Illinois is the extremes.”

Tim Butler, another assistant minority leader, will resign at the end of the year for a private sector position. Rep. Deanne Mazzochi, also on Durkin’s leadership team, trailed in her election by about 200 votes as of Wednesday.

McCombie said Wednesday that she has already decided on one of those positions, naming Rep. Norine Hammond of Macomb to be a deputy minority leader.

“She has been my mentor since I was first elected,” McCombie said. “She has been here. She has seen the legislative aide side of the (General Assembly). She’s been in leadership. She is going to be bringing us knowledge that’s been underutilized.”