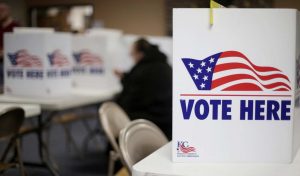 SPRINGFIELD – On Tuesday, Illinois voters will cast a ballot on a state constitutional amendment, every statewide constitutional office, every seat in the General Assembly and, in 12 counties, a spot on the state’s Supreme Court.

For more information about voting, including how to and where to cast an in-person ballot on election day and prior to it, you can visit your local election authority. You can find information for all local election officials on the Illinois State Board of Elections website. Information on where your Election Day polling place can be found here.

Governor’s Race: Gov. J.B. Pritzker is facing off against state Sen. Darren Bailey, a Republican farmer from downstate Xenia. The candidates’ views diverge widely on just about every topic, from abortion to state spending to pandemic response to addressing gun crime. The Libertarian candidate is Scott Schluter.

The candidates’ differences are demonstrated by Bailey’s voting record on some of the major policy proposals backed by Pritzker. Bailey was a “no” vote on almost all of them, saying in one public appearance that he’d like to repeal “everything” Pritzker signed into law during his first term in office.

Pritzker’s refrain in recent debates has been that Bailey “has no plan” for Illinois, and he has painted the Republican as a conservative “extremist.”

Bailey, meanwhile, has focused his attention on crime, especially in Chicago, taxes and state spending.

Comptroller’s Race: In Illinois, the position of chief fiscal officer is that of comptroller.

Democrat Susana Mendoza has been elected to that post twice, for a partial term beginning in December 2016 before gaining reelection in 2018. She touts the reduction of a $16 billion bill backlog to a standard 30-day billing cycle, the state’s largest-ever $1 billion balance in its rainy-day fund and a pension payment that went $500 million beyond statutory levels in the current fiscal year as some of her greatest accomplishments.

Her opponent, Shannon Teresi, is a newcomer to state politics and is the McHenry County auditor. It’s an experience, she said, that will help her root out “waste, fraud and abuse” in state government – one of her most-repeated reasons for running.

The Libertarian candidate is Deirdre McCloskey.

Frerichs touts more than $1 billion in investment gains as his greatest achievement while emphasizing his administrative work on returning unclaimed property, a state college savings plan and other programs overseen by the office.

Demmer has focused his race on being a statewide check on Democratic power when it comes to tax and budget issues.

The race to succeed him features Democrat Alexi Giannoulias, a former state treasurer from Chicago, and Republican State Rep. Dan Brady, of Bloomington. Each has a long list of initiatives they would like to implement to modernize the office.

While Giannoulias has White’s endorsement, the outgoing secretary has also spoken highly of Brady. And Brady has the endorsement of Republican former governor and secretary of state Jim Edgar.

The Libertarian candidate is Jon Stewart.

DeVore was a frequent challenger of the governor’s executive order authority throughout the pandemic, while Raoul defended that authority in court.

DeVore has defended his use of the private lawsuit to go after individuals, including the governor and a special education teacher, who he believes have defamed him. Raoul, meanwhile, said it’s a waste of court resources.

They also differed on the SAFE-T Act, which DeVore wants repealed, and whether the AG should be prosecuting public officials. The Libertarian candidate on the ballot is Dan Robin.

Constitutional Amendment 1: Voters will decide on whether the state’s constitution will be amended to give a right to workers to unionize.

Supporters of the amendment say it is needed to prevent future governors and lawmakers from attempting to pass “right to work” legislation, which former Gov. Rauner attempted to do. Right to work laws prohibit employers from requiring membership in a labor union as a condition of employment.

Opponents, meanwhile, argue that passage of the amendment would give public-sector labor unions greater power, which could lead to more expensive government contracts that create upward pressure on property taxes.