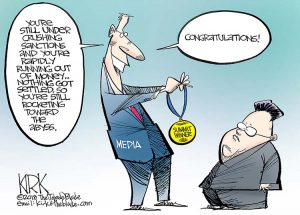 I’m totally puzzled: How could the United States, Canada and Mexico have successfully convinced FIFA, the international soccer governing body, to award the 2026 World Cup competition to North America, the first time in history that the hosts will be three different countries?

But Mexico, Canada and the United States in a joint venue for a NAFTA World Cup? If President Donald Trump goes along as he has so far, the U.S. could be at war with one or both nations by 2026, or at least have built walls on both borders. Or maybe a wall of prohibitive tariffs once he blows NAFTA to smithereens. Will there be special dispensation for Mexican fans who want to watch a match in the U.S? What will prevent them from slipping off and taking up illegal residence?

I’m sure that has occurred to the hard-liners in the White House, along with the other anti-immigrant bigots. I’m just as certain that they’ve already come up with a solution: Perhaps they are making plans to seize the children of any soccer fan and hold them hostage, as the U.S. is doing now by wrenching kids away from parents who dare to cross into the U.S. The treatment of these children is the administration’s latest way to discourage illegal immigration. If it doesn’t do the job, will the administration then take harsher methods, perhaps waterboarding or using North Korea’s way to discourage anyone who dares cross their border? If anyone has forgotten, they shoot them.

President Trump is following his usual model in placing blame after an uproar has erupted over Americans snatching kids out of their parents’ arms. He’s claiming he has no choice because of a law that was passed by Democrats. There is no such law, Democrat or otherwise. It’s a bald-faced lie.

And speaking of usual models, Donald Trump is taking most of the credit for the FIFA award, and perhaps this is a case where one of his tried-and-true tactics did help. In April he sent out this heavy-handed tweet (is that a redundancy?): “It would be a shame if countries that we always support were to lobby against the U.S. bid. Why should we be supporting these countries when they don’t support us (including at the United Nations)?”

Whether that did the trick or not, the U.S. — excuse me, “North America” — prevailed, beating out Morocco, 134-65. The NAFTA proposal was reinforced by pledges from the sponsors of tremendous crowds and, most importantly, $11 billion in profits. It would be remiss if we forgot that the bidding was slowed by the huge scandal in 2015 that nearly consumed FIFA.

The United States, between now and 2026, will have to up its game — its soccer game. This year’s World Cup is being held in Russia. Among the countries not represented is the United States. The U.S. team failed to qualify. There was clearly no collusion there.

It did qualify when it came to using what’s left of U.S. muscle (translated, dollars) to become the 2026 venue. The Trump administration representatives even were able to convince the other nations that its harsh anti-immigrant policies will not be an impediment. Nor will its anti-ally policies.