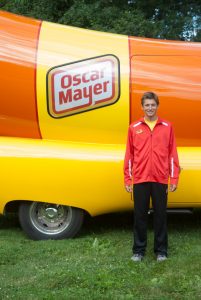 Christian Blatner of Crystal Lake was chosen as one of only 12 drivers of Oscar Mayer’s Wienermobiles.

You can excuse Christian Blatner of Crystal Lake if he shouted “hot dog.”

Blatner was chosen as one of only 12 drivers of Oscar Mayer’s Wienermobiles.

A 2012 graduate of Prairie Ridge High School, he applied for the year-long job after graduating from the University of Wisconsin in May 2016 with a degree in Journalism with an emphasis in Strategic Communications. He was one of 1,200 people who applied for the job.

“Carl Mayer (Oscar Mayer’s nephew) came up with the idea for a hot dog on wheels in 1936,” said Blatner. “It’s still driving 80-plus years later.”

Wienermobile drivers are known as Hotdoggers.

Blatner attended Hot Dog High for two weeks of Wienermobile training, learning everything from how to maneuver the 7-ton hot dog and bun on wheels to Oscar Mayer history — and became a Hotdogger.

Hotdoggers spend the entire year on the road, moving from one city to the next, sleeping in hotels, doing what they can to promote the brand through media and social outlets. In addition to executing promotional events, Hotdoggers are responsible for pitching media, making media appearances, curating content for Instagram and Twitter, completing event reports, scheduling maintenance visits, interacting with sales reps and event contacts, cleaning the vehicle, driving on average 500 miles per week and negotiating hotel rates and booking rooms, among other things.

At Wienermobile events, Hotdoggers take pictures for people, give tours of the vehicle, play games, share stories and, of course, hand out Wiener Whistles. 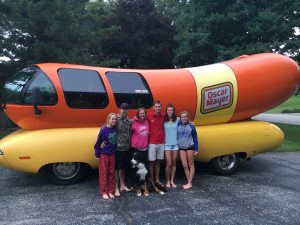 Christian Blatner made a stop to visit his family in Crystal Lake.

Blatner spent the first half of his year in the Northeast with ‘Ketchup’ Kayla, and finished in the Midwest with ‘Relish’ Rachel.

“My favorite part of ‘hauling buns’ on the ‘Hot Dog Highways’ of American are the amazing reactions,” said Blatner. “people’s faces light up when we merge onto the highway or pass a car on the road. We never see anyone that’s unhappy to see us — we may not be a ‘lamborg-wienie’ or a ‘wienie-bago’ but how could you not smile when you see a giant hot dog on wheels?”

His Wienermobile was one of only two in New York City in May to launch the campaign. He and the Wienermobile took a barge to the Statue of Liberty, and he handed out Wiener Whistles in Times Square. While in Crystal Lake, Blatner took his sisters, 12-year-old Rilee and 11-year-old Brielle, to Hannah Beardsley Middle School. Blatner’s father and stepmother are Chris and Dawn Blatner.

Blatner’s long-term goals carve out a successful career in the field of public relations and advertising and to make the most of his time living in Chicago, where he now lives, just blocks from Wrigley Field. Spending a year as a bunrunner proved to be a remarkable opportunity for skill building.

Said Blatner, “I realize that you essentially run a 27-foot-long PR firm on wheels. These are skills that I’ll be able to parlay into a career in public relations.”

Blatner advises potential Hotdoggers to “embrace being in uncomfortable situations. I think one of the biggest skills I picked up this year was being comfortable with the uncomfortable. If you are prepared to take on the challenge of being outside your comfort zone then you’ll have much more success.”