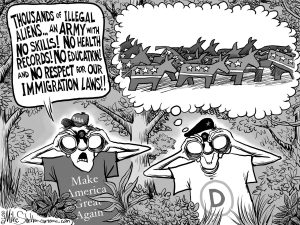 Imagine that: It’s getting so it’s difficult to get away with being slime in the Washington “swamp” these days — or at the very least, much tougher to paper it over by placing a fake-believe veneer of money from the most noxious sources. For generations, we have allowed so many of our most prominent operators to perfume over the stench of their ill-gained prosperity as they have represented the interests here of some of the planet’s most rotten individuals and their brutal tyrannies.

Now we have the Saudis and the likelihood that they have clumsily gone too far with their barbarity. They made the single most fatal mistake when they allegedly decided to rub out the wrong dissident whose barbs were hitting too close to the tyrant’s ego. In this case, the troublemaker was a journalist, Jamal Khashoggi. Not only that, but he expressed his disagreements as a contributor to The Washington Post. The Post, as a paper of record, has an inordinately huge impact. The normal hit job couldn’t be glossed over like it usually could be.

The ruthless repression of the Saudi regime has certainly not been a secret. But for decades, the country’s absolute rulers made sure to provide all the oil we needed and saw to it that billions of dollars were paid to those skulking around the influence community in D.C.

But the Khashoggi hit job was too much for even the most jaded Washington nihilist. Suddenly, those bankers, lobbyists and PR firms that had long groveled for favors from Saudis dropped them like a stone. Their quick calculation was that they needed to duck and cover for a while.

The Washington swamp is really just a huge pond where the scum goes all the way down. Donald Trump could be given some credit for calling it what it is, except, in spite of his promise to “drain” it, he has flooded it with more contaminants. Every day, he and his henchmen come up with another way to add to our political pollution.

At least they don’t pretend to be anything but a crass act. The latest treat from them is word that Trump’s chief of staff John Kelly and national security adviser John Bolton held a high-level catfight outside the Oval Office litter box, loudly squalling profanities at each other in earshot of our leader.

And who could have possibly imagined that Trump and stripper-porn star Stormy Daniels would publicly exchange vitriolic tweets, years after he allegedly got it on with her. He now has called her “Horseface,” and she tweeted back with her own nickname, “Tiny,” obviously referring to his manhood.

At least he hasn’t had her killed. That we know of. As for our other glitterati dazzling in Washington society, they’ll find ways to replace all that money from Saudi Arabia that pays for their kids’ private schools and their first-class travel. They’ll need to for a while, until the storm (the Saudi one, not the stripper one) blows over.

And it will. The special-interest snakes will soon slither out of their lairs, where they sought cover, and they’ll soon take more bites out of the rotten apples. It’s too tasty to let a little expedient conscience get in the way.