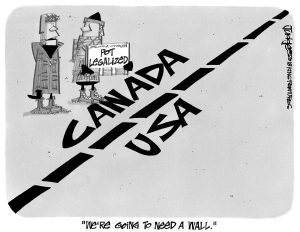 It’s Major League Baseball playoff season, as well as the run-up to the elections. Oh, the games people play.

Way back when, in the early 20th century, New York Giants manager John “Mugsy” McGraw was the first to utter an important life lesson for those who play either form of “Hardball” (thank you, Chris Matthews). “Nice guys,” he growled, “finish last.”

It’s wisdom the Democrats are only now allowing to penetrate their cluelessness. “Really?” they whimper in amazement. “It’s not enough to be righteous?” Not when it’s self-righteous, which is what so many Americans perceive them to be, along with sanctimonious. Nor is it enough when the other team is governed by a mindset of “whatever it takes to win,” fair or foul.

Back in John McGraw’s day, the crosstown Yankees with Babe Ruth dominated “America’s Pastime.” These days, in our other pastime, the Republicans succeed by being ruthless. They don’t really stand for the interests of the great bulk of Americans, opting instead to represent the wealthy few, who long ago realized, as Will Rogers declared, that we have “The best Congress that money can buy.” Actually, Mr. Rogers was only in the neighborhood. It’s really the best government money can buy. And even that’s not true, because, in many cases, it’s really a pretty useless one, which suits the GOP just fine. It keeps their rich patrons happy because they don’t want to be effectively regulated as they pursue their money-grubbing ways.

The Democrats like to think they’re above all that sleaziness, which is totally wrong for two reasons: First of all, the D’s scrounge for dollars as much as the R’s do. Besides, even if they were squeaky-clean, they actually need to be willing to roll around in the mud. Michelle Obama’s “When they go low, we go high” just won’t cut it, particularly when it comes across as being high and mighty.

A few Democrats are even saying so publicly, like former Attorney General Eric Holder, who got a rousing cheer with his “When they go low, we kick them.” He didn’t say where you kick them, but use your imagination. Even Hillary Clinton, who personified her party’s inner sanctimony when she ran for president, caused a few gasps when she declared, “You cannot be civil with a political party that wants to destroy what you stand for.”

Some liberals probably got the vapors when she said that, but she was taught a bitter lesson by Donald Trump, who now occupies the White House, riding a crest through the hateful gutters of his campaign and his dangerous presidency. Hillary’s superior qualifications amounted to nothing. Time for Trump’s enemies to learn some hard lessons from him.

Democrats have evolved from working-class champions to effete snobs. Too many don’t understand that cheap shots work in campaigns, the kind the other side puts out constantly in their TV ads. Cheap shots are expensive. It costs a lot to conduct oppo research and then distort it in TV spots. The liberals need to accept that the only way for a candidate to set up shop inside the Beltway is to hit his or her opponent below the belt. Just like the conservatives do.