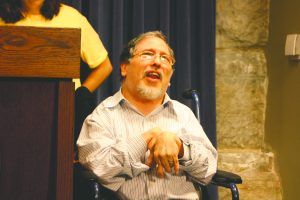 Bob Peterson, of Naperville, said he would have been unable to come to the Capitol to advocate on Thursday, May 16 if he were housed in one of the state’s seven institutions. (Photo by Grant Morgan/Capitol News Illinois)

SPRINGFIELD — DeKalb County resident Tony Stahl said he waited five years for the state to put his disabled daughter, Allison, in the selection process that would allow her to live in her own home in a community. It took an extra three years before that home was found, he said.

After that eight-year wait, Allison is living and paying rent with two roommates in Sycamore, where she also works at Walmart, ushers at a church, and dances at a studio.

Only the community home, rather than a state institution, could “fully address her personal care, medical, and community living needs,” her father said.

Nearly 300 other advocates and people with disabilities came to the Capitol on May 16 to say something similar.

“By segregating people, by limiting access to services and supports necessary for participation, Illinois’ communities are missing out on the benefits and contributions of people with disabilities,” said Meg Cooch, executive director of The Arc of Illinois, a Chicago-based advocacy group.

Cooch said Illinois is second only to Texas in the number of disabled persons it puts into institutions, and that the average annual cost to house someone there — $280,000 — does not compare to the $34,000 average yearly cost to help them live in communities instead. 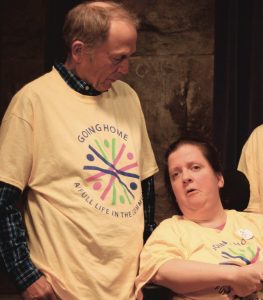 Tony Stahl, of DeKalb County, looks on as his daughter, Allison, speaks about the eight-year wait it took to get into a community home, where she now lives and pays rent with two other roommates. The Stahls were at the Capitol in Springfield on Thursday to advocate for increased state funding to move people with disabilities from state institutions to community homes. (Photo by Grant Morgan/Capitol News Illinois)

Cooch and representatives from the Going Home Coalition held a news conference to urge lawmakers to provide more funding for community-based living for people with disabilities. Among other things, they argued that the $107 million that Gov. J.B. Pritzker proposed to give to the Department of Human Services to help the agency comply with the new minimum wage law is not enough.

Cooch said the average caregiver for people with disabilities is paid between $10 and $11 per hour by the state. While the caregiving role “is not a minimum wage job” in the first place, she said the additional money proposed is still insufficient.

“This is a job that means the difference between independence and non-independence” for people with disabilities, Cooch said. “That money is not enough. We need more from legislators.”

Bob Peterson, a disabled self-advocate from Naperville, said the shortage of caregivers caused by the low wages does not help either, but that without them, it is more difficult to get people into communities where they can be active and engaged.

“Allison and everyone upstairs,” Peterson said during the news conference in the Capitol basement, “we wouldn’t be here if we lived in an institution.”

The state operates seven institutions for people with disabilities. In recent years, The Arc of Illinois has called for the closing of six of those facilities in order to move their occupants into community settings, which advocates say allow people to live safer and healthier lives.