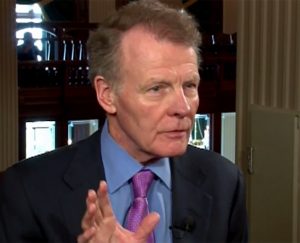 It’s been two weeks since prosecutors indicted former Illinois House Speaker Michael Madigan and a little over one week since he and alleged co-conspirator Michael McClain each entered not guilty pleas on charges including racketeering and bribery.

While the 106-page, 22-count indictment was the culmination of years of investigation into what prosecutors allege to be a near-decade-long “criminal enterprise” overseen by the former speaker, it could be a while before we find out whether the charges stick.

“I cannot imagine seeing a plea deal in this case,” said Nancy DePodesta, a former federal prosecutor and current white-collar criminal defense lawyer at Saul Ewing Arnstein & Lehr. “I also think that you’re going to see a significant delay before this case goes to trial.”

DePodesta’s point of view is an interesting one. From 2003 to 2015 she was a prosecutor in the U.S. Attorney’s Office of the Northern District of Illinois – the same office that indicted Madigan and McClain.

She doesn’t have any insider details, and she’s not involved in the trial. But she did share her thoughts with me on what comes next, in a general sense, as someone whose been on both sides of similar legal fights.

For starters, she said, we can expect to see pretrial motions aiming to suppress evidence. Madigan’s team could try to toss recordings of McClain’s phone calls with other individuals, she said.

McClain, a long-time Madigan confidante, was initially indicted in November 2020 in connection with a yearslong bribery scheme involving utility giant Commonwealth Edison, in which the company admitted to bribing Madigan and others with no-work jobs in exchange for favorable legislation.

DePodesta said it appears the feds had a wiretap on McClain’s calls, and his role in the case is an important one. If the jury believes he acted on behalf of the speaker, it will help the prosecution. But if they believe McClain was a rogue actor, they may be likelier to acquit the former speaker.

“The challenge for the government is really to tie former Speaker Madigan to what was occurring here,” DePodesta said.

Capitol News Illinois · What to Expect When Madigan Goes to Trial

The government is seeking to prove several charges under the federal Racketeer Influenced and Corrupt Organizations Act, a 1970 law originally written to go after mafia types.

It’s the statute that DePodesta said was used when she was working on an investigation and prosecution of the Latin Kings street gang in her time with the prosecutor’s office.

“After a seven-year investigation and multiple indictments along the way, and wiretaps and, you know, cooperating witnesses and sources, we brought RICO charges against the leadership of the Latin Kings street gang,” she said. “It’s obviously very different substantively in terms of the acts that were committed and programs of the conspiracy. But there’s a lot of parallels with the RICO.”

For the racketeering charges against Madigan to stick, she said, the prosecution will have to prove that the parties engaged in an agreement – formal or informal – for an unlawful purpose.

“And then they have to establish that there were acts done in furtherance of that conspiracy. And here those acts would be the attempts to solicit bribes, perhaps the killing of legislation or passing legislation in exchange for jobs given to political allies,” she said.

The indictment alleges that Madigan used his political offices as speaker and committeeman for Chicago’s 13th Ward, as well as his control over the Illinois Democratic Party and the 13th Ward Democratic Organization, and his position at the Chicago law firm of Madigan & Getzendanner, to further the goals of what the feds have dubbed “The Madigan Enterprise.”

In defending himself, Madigan could argue, DePodesta said, that much of what the government describes as racketeering isn’t that far beyond the parameters of what would be expected from anyone in a powerful office such as speaker of the House.

“So I think that if I’m the defense, I certainly want to try to minimize some of the statements, point to some of the things that perhaps the speaker did not say,” she said. “Certainly, explain what it means to be the speaker of the House, and what are some of the functions that are expected in in that capacity.”

It appears that Madigan’s lawyers, Sheldon Zenner and Gil Soffer, viewed that as a strong angle as well when they sent out a media statement on the same day of the indictment.

“I was never involved in any criminal activity,” Madigan said in a statement. “The government is attempting to criminalize a routine constituent service: job recommendations. That is not illegal, and these other charges are equally unfounded.”

As it stands, the 106-page indictment provides a roadmap for how the government will try the case, DePodesta said. But prosecutors may be wishing they had another source, such as a cooperating witness or other informant.

“The government’s case is made up of a lot of different pieces that they will ultimately tie together. It seems, however, that they don’t necessarily have somebody to provide context for some of the recordings to really tell a story,” she said.

While the prosecution may have been hoping McClain’s inclusion in the indictment would lead him to “flip” on the speaker, his public statements so far don’t indicate that such a scenario is likely, DePodesta said.

But that doesn’t mean there won’t be other witnesses testifying against the former speaker that haven’t been named in media reports or court documents thus far.

“The government is not limited to the evidence that it has on the date of indictment,” she said. “In fact, it is very common for the government’s case to improve and become an even stronger case, as they continue to investigate and prepare for trial.”

John Lausch Jr., the lead prosecutor in the case, made clear the investigation was ongoing in a news conference announcing the indictment, and he even called for others to come forward with more information.

The next status hearing in the case is scheduled for April 1.

A lengthier version of my conversation with DePodesta is available in our latest episode of Capitol Cast, a regular podcast put together by our Capitol News Illinois team. You can listen on most podcast apps.