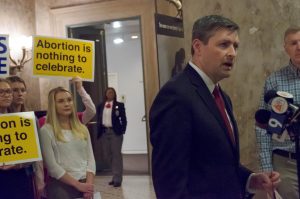 Peter Breen, a former state representative and vice president and senior counsel of the Chicago-based pro-life law firm, the Thomas More Society, speaks during a news event June 12 at the Chicago Cultural Center. He was speaking minutes after Gov. J.B. Pritzker signed into law the Reproductive Health Act. Breen that day said his firm would challenge the RHA in court. On Oct. 21, it filed a complaint with the U.S. Health and Human Services’ Office for Civil Rights, alleging among other things the act discriminates against employers who have religious objections to providing insurance coverage for abortion procedures. (Photo by Rebecca Anzel/Capitol News Illinois)

The Thomas More Society, based in Chicago, filed a complaint Oct. 21 with the U.S. Health and Human Services’ Office for Civil Rights alleging an element of the Reproductive Health Act breaches federal law.

Vice President and Senior Counsel Peter Breen said on June 12, when Democratic Gov. J.B. Pritzker signed the statute, his firm would mount a legal challenge. It is now asking the federal government to “prevent or halt” that law from being enforced.

“The State of Illinois’ out-of-touch determination to enshrine a so-called right to abortion on demand gives it no authority to run roughshod over our real, fundamental right to be free from coerced participation in abortion, including by a mandate from on high that we cover it in our health insurance plans,” according to the firm’s complaint.

The reproductive health care law makes access to pregnancy care, contraception, birth control, abortion procedures and other related benefits a fundamental right, meaning no level of government in Illinois can infringe upon a woman’s or man’s access to those services.

“This provision manifestly violates our good-faith conscientious beliefs and the protections therefor under federal law,” according to the Thomas More Society’s complaint, because it “contains no exemption for religious persons, religious organizations, or even for churches.”

The law firm provides its employees with a small group health insurance plan through BlueCross BlueShield Illinois. According to the filing, it has never allowed coverage for abortion procedures because “to do so would be repugnant to our religious and moral principles.”

Under provisions of the Affordable Care Act, pregnancy-related benefits are offered through the Thomas More Society’s plan. That also means, to comply with Illinois’ Reproductive Health Act, abortion procedures must be covered. Cost-sharing arrangements, such as co-payments, are allowed as long as they do not exceed those that apply to pregnancy-related coverage.

That puts the law firm, and other Illinois employers who have moral, ethical or religious objections, in a “quintessential double bind,” Michael McHale, counsel for the Thomas More Society, wrote in the complaint. Either it provides the insurance coverage to its employees and violates its “deeply held” beliefs, or does not and “severely undermin(es)” the benefits it offers to its workers.

A spokesperson with the Illinois chapter of the American Civil Liberties Union said the state does allow those who provide health insurance and have a religious objection to abortion procedures to opt out of the Reproductive Health Act’s mandate.

It does so, the spokesperson said, in the Health Care Right of Conscience Act, not the state’s new reproductive health care law, and specifies a “health care payer” cannot be discriminated against as long as its objections of conscience are documented in any of its governing documents.

“These anti-abortion activists will go to great lengths in their efforts to discriminate in providing basic health care in the name of religion. There is no grounds for reading the law as they do to create a right to prevent employees from obtaining insurance coverage for abortion,” Ameri Klafeta, director of the ACLU-Illinois’ Women’s and Reproductive Rights Project, said. “The ability to access health care –– and to pay for it –– should not depend on the religious beliefs of one’s employer.”

But the Thomas More Society’s complaint alleges the firm is being discriminated against “solely on the basis of our refusals to provide insurance coverage of abortion.” If the Office of Civil Rights agrees, the RHA would be in violation of the federal Weldon Amendment, a measure passed by Congress along with the budget each year since 2005, according to the Department of Health and Human Services.

In part, the amendment mandates that none of the money allocated to the U.S. Departments of Labor, Health and Human Services and Education can be made available to a state government that “subjects any institutional or individual health care entity to discrimination on the basis that the health care entity does not provide, pay for, provide coverage of, or refer for abortion.”

Last year, the department repealed a guidance memo issued during the Obama administration preventing enforcement of the Weldon Amendment. And in January, the Office for Civil Rights created a group to handle these specific complaints, called the Conscience and Religious Freedom Division.

At the time, OCR Director Roger Severino said, “Laws protecting religious freedom and conscience rights are just empty words on paper if they aren’t enforced. … For too long, governments big and small have treated conscience claims with hostility instead of protection, but change is coming and it begins here and now.”

The Thomas More Society also alleges Illinois’ reproductive health care law and the federal Affordable Care Act are in legal conflict regarding cost-sharing between the insurer and insured. Additionally, according to the firm’s complaint, the Reproductive Health Act violates a proposed ACA rule regarding the collection of further payments from the insured.

Cassidy said the complaint is “just a speed bump. It will not succeed.”

The Thomas More Society was “soundly defeated in the Legislature — even after engaging in misrepresentations and exaggerations about the impact” of the law, and it is “inevitable” the firm is fighting the RHA at the federal level, “still using the tired lies we rejected this session.”

“This complaint is just one more effort to deprive women of their right to quality health care in Illinois, to fight a woman’s right to make decisions about her own body,” Bush said. “Illinois isn’t going to let the Thomas More Society, or the Trump Administration, get in the way of our reproductive health care.”

McHale, who authored the Thomas More Society’s complaint, said in a news release the firm is “confident” the federal government “will take our complaint seriously.”