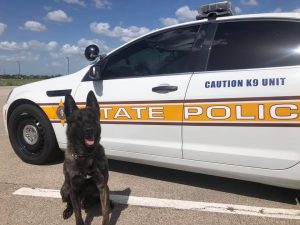 House Bill 3019 creates a new category of felony for causing death or injury of a service animal while driving under the influence. The bill also applies to search and rescue or service animals. (Photo courtesy of the Illinois State Police)

SPRINGFIELD – Lawmakers advanced a bill Thursday, April 15 to make it a felony offense if a person kills or injures a police animal while driving under the influence of alcohol or drugs.

Rep. Joe Sosnowski, R-Rockford, sponsored House Bill 3019, which passed with 72 votes in favor. He said it was brought to him by a state’s attorney from his district.

“We had an unfortunate circumstance of a drunk driver who hit a police safety vehicle, instantly killing a rescue canine that was within that vehicle,” Sosnowski said. “Unfortunately what came out of this was that there’s actually nothing that could be charged to that particular drunk driver if nothing else had happened.”

The driver was charged with driving under the influence in that circumstance, Sosnowski said. But no charges could be brought for killing the police dog.

Rep. Will Guzzardi, D-Chicago, spoke against the bill on the floor for creating a new category of felony for causing death or injury of a service animal while driving under the influence. The bill also applies to search and rescue or service animals.

Sosnowski confirmed that is what the bill would do if the police or rescue animal is killed or injured.

Guzzardi opposed the bill on the grounds of its creation of a new felony offense, and several other Democrats joined him in voting against the measure.

The bill will head to the state Senate for further consideration. 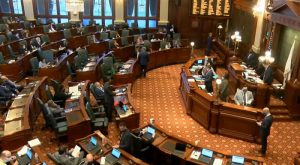 The Illinois House is pictured Thursday, April 15 during hours of floor debate in which lawmakers sent several bills to the Senate. (Blueroomstream.com)

The House also approved a bill to require public universities and community colleges to make feminine hygiene products available free of charge in restrooms owned and operated by the institutions of higher learning. The schools must make tampons and sanitary napkins available in the bathrooms of education buildings.

That measure, House Bill 641, passed with no debate by a vote of 76-31 and will head to the Senate for further consideration.

House Bill 24, sponsored by Rep. Maurice West, D-Rockford, would require public schools that teach sex education for grades 6-12 to include “age-appropriate” education on the impacts of “sexting,” or sending or receiving sexually explicit images electronically.

That education would include the discussion of “the possible long-term legal, social, academic, and other consequences that may result from possessing sexual content.”

That measure passed with 115 votes in favor and none against, sending it to the Senate.

The measures were two among dozens that were approved Thursday, April 15 on the House’s third day of session since returning to the Capitol this week.