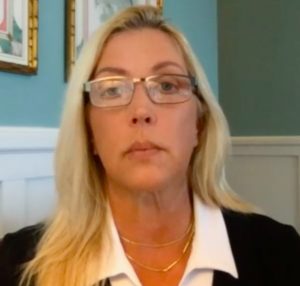 SPRINGFIELD — Two Republican lawmakers on Monday, March 1 unveiled legislation to strengthen internal policies at state-run veterans homes in the case of a disease outbreak, such as the COVID-19 outbreak at the LaSalle Veterans’ Home that resulted in 36 resident deaths since the pandemic began.

The bill, sponsored by Republican Sen. Sue Rezin, defines an outbreak at a state veterans home as two or more staff or residents at the facility contracting an infectious disease within 48 hours of the first diagnosis.

Rezin, of Morris, said state officials with IDPH and IDVA were too slow to react at LaSalle because they did not conduct an on-site visit there until 12 days after the outbreak was reported on Nov. 1.

“I would say that if we were able to go on site immediately and recognize that mitigation protocol was not being followed, we could have slowed this outbreak,” Rezin said during a Zoom news conference Monday, March 1.

SB 2251 would also mandate that IDVA post online the findings of its on-site inspection, as well as corrective actions needed, the dates of follow-up visits, and the initial and follow-up reports from the on-site visit.

Rep. David Welter, also of Morris, introduced a House resolution calling for the Illinois auditor general to conduct an investigation into the deaths at LaSalle, rather the acting inspector general of the Illinois Department of Human Services, who is currently tasked with the investigation.

Welter said Auditor General Frank Mautino should take over the investigation because the auditor general is appointed by the Legislative Audit Commission, a bipartisan committee of House and Senate members, not the governor.

“That is really where we want to see this investigation go — an independent party who is impartial on this and not being paid or hired by the governor,” Welter said during the Zoom conference.

Both Welter and Rezin represent districts that include the LaSalle home.

During the initial Nov. 12 visit at the LaSalle home, a U.S. Department of Veterans Affairs official noted several violations of protocols mandated by the Centers for Disease Control and Prevention, including the use of hand sanitizer containers that had a non-alcohol-based product.

That site visit report also documented examples of staff failing to follow proper protocol for personal protective equipment. In one instance, staff were seen eating with masks below their chins in the kitchen within six feet of one another. In another example, staff were observed touching patients and multiple surfaces without using a new pair of disposable gloves. 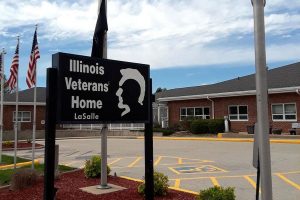 Rezin said the legislation she filed is meant to enforce the recommendations made in the March 2019 Auditor General’s report on the outbreak of Legionnaires’ disease at the Quincy Veterans Home, which resulted in 13 resident deaths at Quincy between 2015 and 2018.

Two of those recommendations are that IDPH and IDVA “ensure that State facilities, such as the Quincy Veterans’ Home, implement all recommendations from the Centers for Disease Control following confirmed outbreaks such as Legionnaires’ disease,” and that IDPH “revisit its policies and determine what response timeframe is adequate to conduct on-site monitoring visits in response to a confirmed disease outbreak such as Legionnaires’ disease.”

She said Gov. J.B. Pritzker failed to follow those recommendations.

“It’s very troubling to both Rep. Welter and I that these recommendations have not been implemented to date with this administration. If it had, we would have been in the site on day three at the LaSalle Veterans Home and caught all of these errors that were happening within the home. And we could have stopped the outbreak within the home, and we could have saved veterans’ lives,” Rezin said during the March 1 Zoom conference.

A spokesperson for the governor said in a statement on March 1  “the administration will work with lawmakers to both strengthen the emergency response to pandemic-related outbreaks at our veterans homes and ensure IDPH has the resources it needs to rebuild their hollowed out state agency that has been on the front lines of this pandemic response.”

In the statement, the governor’s office indicated an independent investigation is underway into the pandemic response at the veterans homes and a report will be made public when it is completed. Pritzker has said all those who did not follow proper procedures and protocols will be held accountable, the statement said.

As it pertains to the audit specific to Legionnaire’s disease, the governor’s office said, IDPH has implemented all recommendations from the Quincy Veterans’ Home, including a site visit from the agency within 24 hours of when legionella was detected.