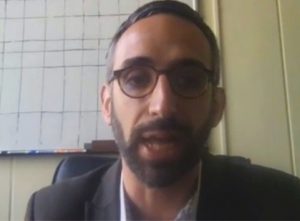 SPRINGFIELD – A new amendment to House Bill 116, which advanced out of committee earlier this spring, would allow municipalities to vote on rent control measures through referendum.

HB116 as originally introduced would have lifted the state’s blanket ban on local rent control measures, which has been in place since 1997. The new amendment instead would give that power to voters and municipal governments to consider rent control measures on a community-by-community basis.

The bill’s sponsor, Rep. Will Guzzardi, D-Chicago, said he chose to introduce the amendment as a compromise after hearing from constituents and colleagues in the house.

“We’ve gotten great support for (this bill) in the chamber, but we also heard some concerns from some colleagues about lifting this ban statewide,” Guzzardi said Wednesday, April 21.

“There were some members who spoke to me and said well you know, the people in our community really think that this ban is important, and voters in my district don’t want to be exempted from the ban,” he added.

Guzzardi said in an April 21 Housing Committee hearing that the new amendment would lay out a process to allow local voters to introduce a ballot measure for rent control, from the petition process to placing a referendum on the ballot.

Under the act, if voters of a municipality pass a rent control referendum, the municipality would be considered exempt from the state’s blanket ban on rent control policies, allowing the local government to set caps on rent prices.

“If a community can get the signatures to get a petition on the ballot and pass a referendum, and its locally elected officials can pass an ordinance to govern rent increases in their community, boy, it doesn’t seem like we should be standing in that community’s way,” Guzzardi said Wednesday.

Opponents of the legislation, including Greg St. Aubin of the Illinois Realtors Association, called the bill “a very destructive policy” that would discourage investment in new housing developments and create an atmosphere of uncertainty for developers and landlords around the state.

“Our view is that whether you lift the ban in its entirety, or you go with this model, we believe that it is sending a tacit message from the state to local governments that (rent control) is a legitimate, viable, and perhaps even worthwhile policy, and we disagree with that,” St. Aubin said.

Republican opponents on the committee raised concerns that the bill still goes too far in opening the door to regulating rental costs for landlords who need to set prices in order to adequately maintain their rental properties, and that the legislation could allow for a wide range of rules on rent across the state.

Rep. Andrew Chesney, R-Freeport, said the bill would be an overreach on regulating landlords.

“Theoretically, a vote, a referendum and a city council could completely obliterate whatever business they have. So, I mean, doesn’t that seem like a complete government takeover of a private business?” Chesney said.

“There’s no protection to the actual owners that gives them any certainty of what the city councils would even be able to do,” he added.

Guzzardi responded that the bill is intended to give more flexibility and power to local municipalities to decide for themselves if rent control is an approach they would like to consider, and that the bill would play no part in determining a statewide policy on rent control.

“We are offering the marvelous and much beloved protection of democracy,” Guzzardi said. “Right now, communities have no voice in this manner.”

Rep. Delia Ramirez, D-Chicago, agreed that the legislation as amended would provide a fair balance across the state to leave a preemption on rent control in place while simultaneously providing municipalities the ability to decide for themselves if they wish to initiate rent control.

“I think that this bill really gives us an opportunity to leave it to the voters to decide where they stand, and then go back to the local authorities (when they) decide they want to entertain the conversation,” Ramirez said.

The bill as amended passed the Housing Committee by a 14-8 vote.

Proposed legislation aims to protect renters based on source of income