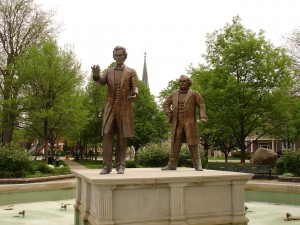 New additions to the Lincoln Heritage Area would now include all the sites of Lincoln’s legal career and Lincoln-Douglas debates. Pictured are statues of Abraham Lincoln and Stephen A. Douglas in Washington Park, Ottawa, Illinois USA, near the site of the first of the 1858 Lincoln-Douglas Debates. Photo by Ivo Shandor

The Heritage Area currently covers 42 counties across Illinois. By adding Livingston County, and the cities of Freeport and Jonesboro, all of the sites of Lincoln’s legal career within the Eight Judicial District, as well as the sites of the Lincoln-Douglas debates, would now be included in the Heritage Area.

“Abraham Lincoln still stands today as a symbol of human dignity and freedom, and honoring his life and legacy through this Heritage Area expansion is a fitting tribute,” Senator Kirk said.

“Just as Illinois left its mark on the character of Abraham Lincoln, Lincoln left his lasting impressions on our state’s artifacts, landscapes, buildings and folklore,” Senator Durbin said. “That is why I introduced legislation ten years ago to establish the Abraham Lincoln National Heritage Area and create a network of opportunities for people who are interested in exploring Lincoln’s history in Illinois. Since that bill was signed into law, a growing number of people have been able to explore historic sites in communities across Illinois. I fully support this effort to expand our existing network of Abraham Lincoln heritage sites, and increase opportunities for Illinois visitors and residents alike to experience the magic of Lincoln’s legacy.”

“As one of our nation’s most revered leaders, Abraham Lincoln held our nation together in one of its most challenging times,” said Congressman Kinzinger. “As President, his vision echoed the values of freedom, opportunity, and equality. I am proud to introduce this legislation to strengthen the Abraham Lincoln National Heritage Area’s mission of telling the story of Lincoln’s life and time in central Illinois.”

“As the representative of Springfield, Illinois, home and resting place of Abraham Lincoln, I am proud to join my colleagues in introducing this legislation to expand the Abraham Lincoln National Heritage Area and continue Lincoln’s message of liberty and opportunity for all,” said Davis.

“Since Lincoln actually had the debate in Jonesboro; the fact that in the book “When Lincoln Came to Egypt,” it mentions he spent much of his time in Southern Illinois; being a co-sponsor of this amendment seemed only appropriate. Future generations will benefit from this, as well,” said Congressman Bost.

“Abraham Lincoln was one of the finest Presidents our nation has ever known, and an example for us all to aspire to,” said Congresswoman Bustos. “I’m proud to join today with my colleagues from Illinois to lead this bipartisan effort to honor his incredible life and legacy by expanding the Lincoln Heritage Area to include the City of Freeport in my Congressional district.”

“Expanding the Lincoln Heritage Area in Illinois will help preserve the rich history and legacy of one of America’s greatest presidents,” said Congressman Shimkus. “I’m proud to support this bipartisan legislation.”