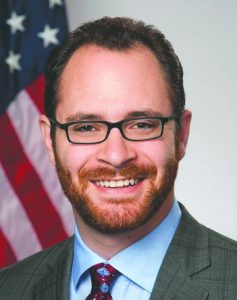 SPRINGFIELD — Illinois government employees should not travel for work to states that “criminalize reproductive health,” a northwest suburban Democrat said.

Rep. Daniel Didech, from Buffalo Grove, proposed legislation Sept. 26 that would prohibit the state from requiring staff to travel to states with laws effectively banning abortion or requiring investigations into the cause of a miscarriage. It would also bar the government from reimbursing an employee for travel to one of those states.

In the first six months of 2019, 12 states passed some form of a law restricting access to abortion. Those states surround Illinois to the east and southwest, and cut a swath south to the Gulf of Mexico. They include neighboring Indiana, Missouri and Kentucky.

“What these other states are doing is, to me, very dangerous. To a large extent, yes, abortion is a big part of it, but it’s not entirely about abortion,” Didech said. “As a member of the Legislature, I have the responsibility to protect our state employees.”

State government staffers travel for a number of reasons, including conferences, litigation and training as required by a grant or license. Some of those kinds of trips are excluded by his measure.

Didech said a major reason for his legislation is to protect state employees who are pregnant from being in states where they might be prevented from receiving necessary health care. A scenario he mentioned was that a female state employee who miscarries in a state where such medical events must be investigated “could get tangled” in something out of her “control.”

He said the legislation is not meant to be an economic sanction against states with strict abortion restrictions.

“This is not like a boycott of those states or anything like that, although in effect, it may look similar,” Didech said. “The purpose of the bill is to protect women who may not be able to get the health care they may need when they’re traveling on official state business.”

If enacted, his bill would apply to all three branches of government. It would additionally apply to all states with statutes barring access to abortion procedures or with miscarriage investigation requirements, until those states either repeal them or a court strikes them from their books.