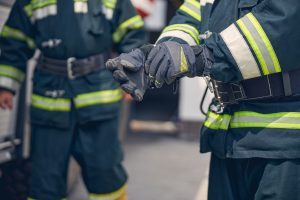 To qualify for the tax credit, volunteers must work for a fire department or fire protection district for at least nine months and not receive more than $10,000 in compensation for those services during the taxable year.

SPRINGFIELD – Members of the Illinois Firefighters Association joined state legislators at a news conference Wednesday, March 23 to outline a measure that they claim would recruit more long-term volunteer firefighters and EMS personnel by offering them a tax credit.

Senate Bill 3027 would provide a $500 tax credit to those who serve as volunteer firefighters or EMS personnel. To qualify for the tax credit, volunteers must work for a fire department or fire protection district for at least nine months and not receive more than $10,000 in compensation for those services during the taxable year.

Sen. Christopher Belt, D-Swansea, chief sponsor of the bill, said offering the tax credit would help address the shortage of firefighter and EMS personnel at departments that rely on volunteers.

“These individuals give up their personal time that could be spent with their families to ensure the well-being of our state’s residents with no monetary incentive,” Belt said.

The bill states that if the tax credit exceeds the tax liability for the year, the excess can be applied to the earliest tax year in which there is a tax liability. The credit will not reduce a taxpayer’s liability to less than zero.

During a news conference March 18, Belt noted that if the bill is approved, it would cost about $20 million to $22 million in lost revenue to implement it. Belt said the cost upfront pales in comparison to the lives lost without volunteer firefighters and EMS workers.

Margaret Vaughn, government affairs director at the Illinois Firefighters Association, said the number of emergency calls to fire departments has tripled over the past 20 years, with most calls being for EMS, while the number of volunteer emergency workers continues to decrease.

Vaughn told the story of a fire at a 100-unit apartment dwelling in Silvis, a blaze that, according to National Fire Protection Association standards, should have had 30 firefighters facing it. But only five firefighters showed up.

“That is a public safety crisis,” Vaughn said.

“They don’t do it for the money (or) do it for the glory,” Bennett said. “They do it because they are committed to their communities, their neighbors and their families and they want to help.”

The measure passed the Senate unanimously but awaits further consideration in the House. The House Revenue and Finance Committee is expected to discuss uncertainty as to how the tax credit would be implemented Thursday morning.