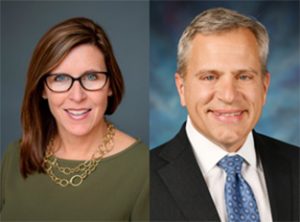 State Rep. Ann Williams (left) and Sen. Robert Martwick, both Chicago Democrats, filed legislation Monday, Dec. 21 that would allow the General Assembly to meet and vote remotely during a pandemic or other emergency that makes in-person meetings dangerous.

SPRINGFIELD – Two lawmakers have introduced legislation that would allow the General Assembly to meet and vote remotely during a pandemic or other emergency that makes in-person meetings dangerous.

“In March, we had no idea a pandemic would sweep the globe, bringing life as we know it to a halt,” Williams said in a news release. “While we were able to meet for a few days in May to conduct urgent business, we continue to face a crisis of epic proportions – both on the public health front and in terms of our budget situation – that requires legislative attention.”

“The governor has emergency powers to secure the health of our state,” Martwick said. “However, it is the Legislature’s responsibility to enact the long-term policies, in accordance with the needs of our unique and diverse constituencies, which will chart the path forward as we recover from this pandemic.”

Business in the General Assembly halted in March, around the same time Gov. J.B. Pritzker declared a statewide disaster. Lawmakers held a brief special session in May, mainly to pass a budget and a few other urgent pieces of legislation, but they canceled their usual fall veto session and have not conducted any official business since May 24.

During that special session, the Senate enacted a procedural rule that allows its committees to meet remotely, but only for informational meetings. They are not allowed to take recorded votes. The only committee that has taken official action since May has been the Joint Committee on Administrative Rules, which has held monthly in-person meetings in Springfield.

A bill that would have allowed lawmakers to meet and vote on legislation failed by a single vote in the House in May.

Under the proposed legislation, remote sessions and committee meetings would be allowed “in times of pestilence or an emergency resulting from a domestic or foreign terrorist attack” if the speaker of the House and Senate president issue a joint proclamation. The bill also contains a provision requiring the meetings be accessible for the public to view.

The bill is House Bill 5868. As of Monday afternoon Dec. 21, the Senate version had not been assigned a bill number.