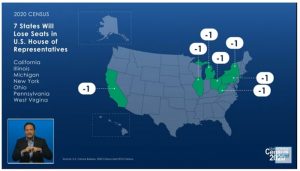 SPRINGFIELD – The U.S. Census Bureau announced Monday, April 26 Illinois will lose a seat in Congress based on the results of the 2020 census.

Illinois will move from 18 to 17 seats in the U.S. House, an expected result after some advocates had warned that an undercount could lead to the loss of two seats. The state has lost at least one congressional representative in eight of the last 9 decades after peaking at 27 seats in 1910 and remaining there until the 1940 census.

Illinois, Mississippi and West Virginia are the only three states to lose population over the past decade, Census Bureau officials said Monday. It’s the first time the Census Bureau logged a decade-over-decade population loss in the state.

According to data released Monday, April 26, the state has a total population of just over 12.8 million people, a drop of 0.1 percent when compared to 2010.

While the population loss was not as pronounced as some had originally anticipated, Gov. J.B. Pritzker said in an unrelated news conference Monday that he was “concerned” about outmigration in the state, which he said has been taking place “for more than a decade.”

“We’ve got to turn that around,” Pritzker said. “That’s something that unfortunately before I became governor was a bit set in clay, if not stone. And now, we’re working very hard to make sure we’re going the right direction.”

Pritzker attributed the population loss primarily to college students who choose not to attend school in the state.

Census Bureau officials said that specific data used for redistricting would be provided by Sept. 30. The delay in official numbers could cause complications for Illinois’ redistricting process, which is currently underway.

Some Democratic state lawmakers have proposed using data from the American Community Survey in place of census data to create legislative and congressional district maps by the end of June as required by the constitution.

Rep. Tim Butler, a Springfield Republican who is the minority spokesperson on the House Redistricting Committee, said in a Monday news conference that ACS data provides “a small snapshot” of population data when compared to the census, and could risk leaving populations out of consideration.

“As we’ve said all along throughout these hearings, ACS data is not what you need to use to draw the maps because it’s not going to give you the granular data and the correct data,” he added.

Republicans have repeatedly called for an independent, nonpartisan commission to draw new legislative boundaries without taking partisan politics into consideration, a proposal which has not been entertained by members of the state’s Democratic supermajorities in either chamber.

“The maps need to be drawn, in my mind, without the political data put in them,” Butler said. “The most important data for the majority is going to be the political data and people’s home addresses that they include in there, and they’re going to draw the maps how they see fit probably.”

“We are reviewing the information released today by the U.S. Census Bureau and remain committed to working with our partners in Washington to ensure Illinois continues to receive the federal resources and support our communities need,” the statement reads. “While the Census Bureau confirmed full redistricting information may not be released until September, we will not abandon our duty to craft a map by June 30 as required by the Illinois Constitution. As others seek to delay and distract, we are focused on gathering input from communities of interest across Illinois to create a fair map that reflects the diversity of our great state.”