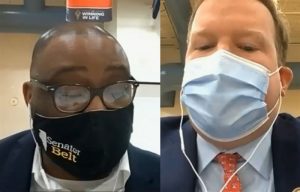 SPRINGFIELD – Democrats and Republicans in the Illinois General Assembly are continuing to wrangle over the possible use of census estimates, as opposed to official numbers, to redraw state legislative and congressional district maps.

It’s a decision that could have a significant impact on whether Illinois residents are equally represented in the Statehouse and Congress, and one that is particularly important for communities of color and other underrepresented groups.

But the decision also could determine whether lawmakers themselves will draw the maps, or whether the job will be handed over to a bipartisan commission. That’s because delays in the 2020 census caused by the pandemic and other factors mean the official, block-level census numbers needed for legislative redistricting won’t be available until several weeks after the June 30 deadline set out in the state constitution for completing the process.

The Illinois Constitution does not specify what data lawmakers are to use when redrawing maps, although they have traditionally relied on final, official numbers from each decennial census. But because of delays in producing those numbers this year, Democrats in the General Assembly have suggested using other data such as the Census Bureau’s American Community Survey, which is based on a sample of households around the country.

That has been the subject of heated debate during hearings of the House and Senate redistricting committees, including a joint hearing held Monday evening in East St. Louis.

“If the General Assembly misses the June 30 deadline, mapmaking will be turned over to a commission of political insiders. The public will be cut out of the process entirely,” Sen. Christopher Belt, D- Centreville, said during that hearing. “This is not an independent commission, as some have wrongly claimed. It is a commission of political appointees named by legislative leaders. That’s not democracy. That’s a disservice to the people we represent.”

Republicans, like Sen. Jason Plummer of Edwardsville on the other hand, argue that June 30 is really just the deadline for lawmakers to draw the maps. After that, the job is handed over to an eight-member bipartisan commission. And if that commission can’t complete its work by Aug. 10, a ninth member from one of the two major parties is chosen at random by the secretary of state and the deadline is extended to Oct. 5.

They argue that instead of rushing to meet the June 30 date, it would be better to wait for the more accurate census data and let the process be handled by a bipartisan commission – either the one spelled out in the constitution, or a slightly different one they have proposed in legislation.

“Let me be very clear, the only people concerned about June 30 and providing misleading information about that supposed deadline are those very politicians who want to use this process as a way to empower themselves to the detriment of their constituents,” Plummer said. “Extending the time period would allow us to use the actual census data, not the ACS data.”

In this debate, both sides lay claim to protecting the interests of communities of color and other hard-to-count groups. Republicans argue that the ACS routinely undercounts minority residents and that official census numbers are more reliable, especially after the state spent $50 million last as part of an effort to boost participation in the census.

But Democrats have argued that this year in particular, the survey data may be more accurate in counting those groups because of historically low participation rates among some groups during the 2020 Census.

Belt, who worked in the Metro East area encouraging people to fill out the census forms, said he saw the reluctance on the part of some communities firsthand.

“And every single time we tried to do something, we were lucky if we got 14-15 people to come up, because they were afraid, for a host of reasons,” he said. “Then I go to Fairmont City, a largely Hispanic-Latinx community, and they are afraid that the Census Bureau is going to act as a law enforcement agency, and send them back. So they don’t come up. And so they don’t take part in it.”

Christopher Mooney, who teaches political science at the University of Illinois Chicago, said during a webinar about redistricting Tuesday that there is likely a more strategic reason for Democrats to push for using the ACS data – positioning themselves for an all-but-certain court challenge.

“If you lay down a marker (saying), these are the maps we want, and they get challenged, then you have first dibs at editing them up,” Mooney said. “It doesn’t have to go back to the old process.”

Michael McDonald, a redistricting expert and University of Florida political science professor, also said during that webinar that ACS numbers are poorly suited for redistricting purposes, but that they could be useful in states like Illinois where lawmakers face a deadline.

“If you’re under a tight timeline, and legally you have to have districts adopted by a drop-dead date, and that drop-dead date may be before the release of the actual redistricting data, you’re better off getting some districts drawn using some basis for drawing them like the ACS and then cleaning up afterwards,” he said.