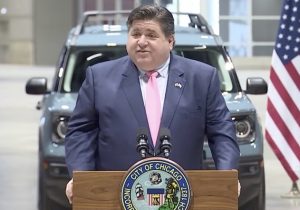 Gov. J.B. Pritzker speaks during a news conference at Chicago’s McCormick Place Tuesday, May4. Pritzker said the Chicago Auto Show’s return will be “setting the stage” for other large-scale events later this year. (Illinois.gov)

The announcement comes one day after Pritzker announced the state could be moving forward to the “bridge” phase of reopening as early as next week, which allows for large-capacity venues such as convention halls and outdoor events to resume operations with capacity guidelines and safety measures in place.

Pritzker said the return of one of the state’s top convention attractions is a “critical step” towards the state’s full economic recovery.

“With strong public health protocols in place, the Chicago Auto Show will be the first large convention to take place in Illinois since the onset of the COVID-19 pandemic, setting the stage for the safe return of big events in the months to come,” Pritzker said in a news conference at Chicago’s McCormick Place convention center, which hosts the Auto Show.

According to a news release, the Auto Show will be held from July 15 to 19 and will incorporate “innovative” safety measures, such as a hybrid indoor-outdoor setting for the first time in its history.

Other safety measures will include timed entrance windows and staggered admission, contactless tickets, temperature checks, medical questionnaires, and a requirement to wear face coverings at all times.

The event would not require proof of vaccination for entry, officials said.

The safety measures offer a preview of what some larger-scale events in the state’s bridge phase could look like, as officials expect to welcome other conventions and tourist events this summer with safety precautions, according to a Tuesday news release.

At the news conference Tuesday, Chicago Mayor Lori Lightfoot said she aims to have the city of Chicago “fully open” by July 4.

When asked about the state’s reopening timeline Tuesday, Pritzker would not provide dates for when public health restrictions may be lifted, but said he remained “optimistic” about lifting some restrictions in the weeks ahead.

“We’ve set metrics for moving forward into the bridge phase and then to Phase 5,” Pritzker said. “At least on the trajectory we’re on now, it looks like we’ll be on a very similar timeline (to the city of Chicago).”

“We always are on guard, we’re watching the numbers like a hawk, but I’m optimistic. I think that things are going in the right direction,” he added.

While Pritzker and public health officials expressed optimism for the return of large events amid declining COVID-19 positivity rates, he stressed that the state remains “a long way from herd immunity,” and encouraged residents who have not been vaccinated yet to do so.

“The trends are encouraging, but we must be cautious as we move forward,” Illinois Department of Public Health Director Dr. Ngozi Ezike said in a statement. “As more venues reopen, it is critical that we increase the number of people who are vaccinated.”

“Immunity is how we stop transmission of this virus, but we need greater community immunity and that requires as many of us as possible getting vaccinated as soon as possible,” she added.

As of May 4, over 9.4 million vaccine doses had been administered statewide, with 40,361 doses being administered Monday.

A total of 4.1 million Illinois residents, or 32.5 percent of the state’s population, have been fully vaccinated against COVID-19.