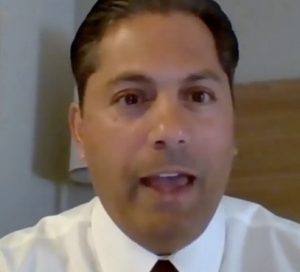 SPRINGFIELD – A bill which would implement term limits on leadership roles in the Illinois General Assembly advanced out of committee Wednesday, April 14.

House Bill 642, introduced by Rep. Anthony DeLuca, D-Chicago Heights, would bar any individual from serving more than 10 consecutive years in a leadership position in the General Assembly, including speaker of the House, president of the Senate and minority leader positions in each chamber.

The bill, if signed into law, would take effect for all legislators taking office on or after the second Wednesday in January 2023.

While the Illinois House and Senate both passed term limits on party leadership in their respective chamber rules in January, DeLuca said his bill would be important to enforce the new rules via state law.

“We heard the word historic quite a bit when leadership term limits (were) approved in our House rules,” DeLuca said. “This is really taking it to an entirely new level.”

The changes in rules regarding party leadership come on the heels of former Speaker Michael Madigan’s ousting following his record 36 years as speaker of the Illinois House between 1983 and his resignation in January of this year.

DeLuca credited new Speaker Emanuel Chris Welch, of Hillside, who was selected by his House Democratic colleagues to replace Madigan in January, for helping push for term limits.

“This is an initiative of really the membership in the House and of Speaker Welch and I want to give Speaker Welch a lot of credit for supporting this measure,” DeLuca said.

While the bill received bipartisan support from committee members, Rep. Jehan Gordon-Booth, D-Peoria, questioned the constitutionality of the legislation, and whether members of one legislative chamber should have the authority to dictate term limits for the other chamber.

“The (state) constitution restricts the power for determining the House’s rules of its proceeding and choosing the House’s own officers solely to the House,” Gordon-Booth said. “From the looks of it, your bill would potentially bring in the Senate and the governor to decide who can be the speaker and the minority leader.”

DeLuca responded he was “not aware of anything that would affect anything of that nature.”

“I’m certainly not going to act like (a) judge here and decide to make a ruling on whether something is constitutional or not,” he said.

“I’ll certainly leave that for the court, but adding this provision in statute, I believe is constitutional,” he added.

The bill passed the House Executive Committee Wednesday by a 12-0 vote.