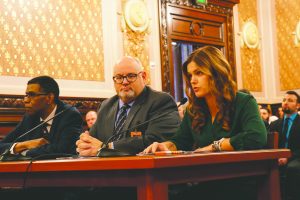 Terry Mason (from left), CEO of Cook County Department of Health; Mike Grady, from the Strategic Advocacy Group representing the American Cancer Society’s Cancer Action Network; and Ruby Johnson, an activist with Parents Against Vaping E-Cigarettes, testify Tuesday at the Capitol in Springfield during a preliminary hearing on legislation that would ban the sale of flavored tobacco products in Illinois. (Photo by Lee Milner/Illinois Times)

SPRINGFIELD — Legislation banning retailers from selling flavored nicotine products in Illinois will likely come before lawmakers in mid-November, its sponsor said Oct. 29 after a preliminary hearing.

Senate President John Cullerton’s “Flavored Tobacco Ban Act” bill is one of six pending in the General Assembly that would ban flavored products including cigarettes and electronic vaping pods. The Chicago Democrat’s bill, however, has the highest-profile backing.

His measure would place a wholesale moratorium on the sale of any product made from or containing tobacco with a flavor added, and is targeted at restricting minors’ access to such goods, according to a news release.

One of the stakeholders who testified before state senators about Cullerton’s bill was Ruby Johnson, an activist with Parents Against Vaping E-Cigarettes. The oldest of her seven children was hospitalized with a lung-related illness resulting from vaping.

She said she favors curbing access to flavored tobacco products because “our kids’ health and safety isn’t a fight we can afford to walk away from.”

“These products were allowed to flood the market without anyone knowing how they would cause damage, and now we’re trying to clean up a mess. We have a generation of teens addicted to nicotine, people continuing to get sick, and according to the (Centers for Disease Control) no definitive answers as to the culprit responsible for these cases,” Johnson said.

“With youth tobacco rates at an all-time low, kids who would have never picked up a traditional cigarette instead started using flavored e-cigarettes — proprietary flavors that are cocktails of known toxins in devices that are easily tampered with and adulterated,” she added.

In Illinois, more than 150 people have been sickened with lung injuries resulting from the inhalation of chemicals from vaping, according to the state’s Department of Public Health. Two Illinoisans have died.

Brian Fojtik, a consultant with the National Association of Tobacco Outlets, told the panel of lawmakers “by just banning everything, you create more problems than you solve.”

He pointed to the state’s Tobacco 21 law — which passed in April and restricts the sale of tobacco products to those older than 21 — and said legislators should see what effect it has on vaping by youths before passing a new product ban.

Fojtik also said if lawmakers’ concerns relate to the number of vaping-related lung illnesses in the state, “then why include other tobacco products that will result in a myriad of other unintended consequences and create a host of other problems?

“This legislation impacts many products,” he said. “The products are all different. The consumers who use them are different.”

Cullerton said he was using the testimony “to decide what to do.” This initiative is his latest anti-tobacco measure. Previously, he successfully pushed for the Tobacco 21 law, a cigarette tax increase, a new tax on e-cigarettes and the Smoke Free Illinois Act.

“It’s a big bill. There’s no state in the nation that has passed it, but there are states that have gone after the vaping industry,” the Senate president said.

When asked if there was a potential he might remove language banning flavored tobacco products from the measure, Cullerton said, “I’d consider it. … I’d like to pass the bill. But if I don’t have the votes, especially in the House I can’t — I’d rather pass something.”