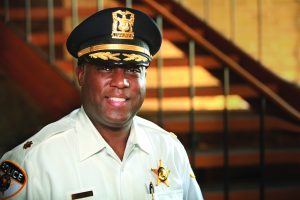 Illinois senior Senator Richard Durbin took a senate colleague to task last week for his continued obstruction of the appointment of a local Chief of Police to be the U.S. Marshal for Northern Illinois.

Durbin leveled the criticism against Arkansas Senator Tom Cotton during an Executive Business meeting of the Senate Judiciary Committee on Feb. 10. Durbin, who chairs the committee, criticized Cotton for his continued “stalling tactics” in opposing the nomination of Oak Park Police Chief LaDon Reynolds.

While most nominees to U.S. Attorney and U.S. Marshall positions are routinely approved by unanimous consent, Senate rules allow a lone senator to delay a final vote for nominees for weeks and even months.

Reynolds was one of three nominees for U.S. Marshall positions in Illinois forwarded to the committee in June by Durbin and U.S. Sen. Tammy Duckworth (D-Illinois). Durbin made particular note of the fact that the position he nominated Reynolds to fill has been vacant for nearly four years, since May 2018.

In a June, 2021 press release announcing Reynold’s and other nominations, Durbin and Duckworth noted that they had relied on three screening committees to review candidates for U.S. Attorney and U.S. Marshal positions in Illinois. Those screening committees were “comprised of distinguished members of Illinois’ legal community, including former judges, prosecutors, defenders, litigators, academics, legal aid attorneys, and law enforcement leaders.”

Cotton made it clear he would continue delay a floor vote for Reynolds and numerous other nominees, until the U.S.  Department of Justice agrees to defend four Deputy U.S. Marshals currently being sued in civil court over their actions during chaotic demonstrations outside the U.S. Courthouse in Portland, Oregon in 2020.

One of those federal Marshals being sued has already been formally rejected by the DOJ. Its reply stated, “After careful review and consideration of the information currently available, I have determined that representation would not be in the interest of the United States. Accordingly, the request for representation is denied.”

On Jan 31, Cotton sent a letter to U.S. Attorney General Merrick Garland, urging him to commit to the legal defense of the four marshals.

“A refusal to represent these Deputy Marshals would violate the Department’s long-standing practice — not to mention its moral duty — to defend law-enforcement officers when they’re sued for actions in the line of duty.”

Durbin said Cotton was punishing the people of Chicago and the Northern Illinois region in retaliation for something that happened in Oregon.

“You are not just punishing him, but you’re really striking out at a situation, in my state, that desperately needs attention,” Durbin said. “That is law enforcement [needed] to stop the gun violence and death. How can this be in honor of U.S. Marshals (in Portland) when you’re holding up a U.S. Marshal (in Chicago)?”

“If you’re going to make a speech about the violent crime and the death statistics that we’re seeing across the United States, you cannot make that speech and hold up the U.S. Marshal that I need in the Northern District of Illinois to execute the duties of that office. It’s long overdue,”

Reynolds has served as chief of the Oak Park Police Department since 2019. He has been a police officer since 1994, including patrol officer, sergeant, commander, deputy chief and acting/interim chief. He serves on the Illinois Law Enforcement Training and Standards Board and the Illinois Commission on Discrimination a