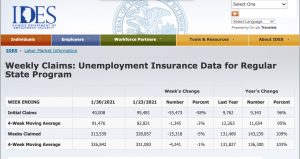 SPRINGFIELD – First-time unemployment claims in Illinois dropped sharply in the last week of January as most regions in the state slowly began reopening following the latest wave of the COVID-19 pandemic.

The Illinois Department of Employment Security reported Thursday, Feb. 4 that 40,008 workers filed initial claims for regular unemployment benefits during the week that ended Jan. 30. That was a 58 percent drop from the previous week when 95,481 people filed claims.

Still, that number was more than four times higher than the same week a year ago, before the pandemic took hold in Illinois.

The four-week rolling average number of new claims also dropped 2 percent, to 81,476. But that was still seven times higher than the comparable period in 2020.

For the week that ended Jan. 23, the number of Illinois workers receiving continuing unemployment benefits fell less than 2 percent, to 322,670. Nationwide, that number fell 2.4 percent, to just over 5 million.

The state’s overall unemployment rate for January won’t be released until later this month. In December, that rate climbed seven-tenths of a point, to 7.6 percent, which was more than double what it had been a year earlier.

Also in December, Congress passed the Continued Assistance Act, or CAA, which renewed two federally-funded unemployment programs that were set to expire at the end of that month. The act also provides an additional $300 per week in benefits, half the amount of supplemental benefits that had been included in the original Coronavirus Aide, Relief and Economic Security, or CARES Act. Those supplemental benefits had expired the week of July 25.

Another program the act renewed is the Pandemic Unemployment Assistance, or PUA program, which provides benefits to independent contractors, self-employed individuals and others not covered by traditional state unemployment insurance. But state officials throughout the country, including Illinois, had complained that the initial program was fraught with fraud because it did not require applicants to verify their previous employment.

IDES announced Wednesday, Feb. 3 that it was implementing several required changes that program, including a requirement for applicants to verify their previous employment or self-employment.

In addition, IDES said, people who had exhausted their benefits under that program before Dec. 26 may remain eligible under the extension and will be notified of the additional weeks added to their claim.

The CAA also renewed Pandemic Emergency Unemployment Compensation, or PEUC, which provides an additional 11 weeks of benefits for workers who have exhausted their regular benefits. However, IDES said, the way people transition to that program will vary based on how and when they exhausted their other benefits. The agency said transitions will be evaluated on a case-by-case basis.