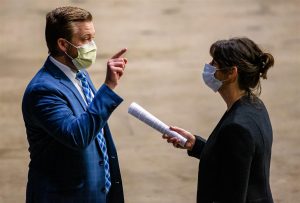 Rep. Kelly M. Burke, D-Evergreen Park, talks with Rep. C.D. Davidsmeyer, R-Jacksonville, after SB 2135, a bill which makes changes to government operations due to the COVID-19 pandemic, Saturday, May 23 during an extended session of the Illinois House of Representatives at the Bank of Springfield Center in Springfield. (Pool photo by Justin L. Fowler/The State Journal-Register)

SPRINGFIELD – A broad-ranging bill creating a limited oversight panel of the governor’s Restore Illinois plan among other measures passed both chambers of the Illinois General Assembly on Saturday night (May 24) after its two most controversial provisions were removed in the House.

The removed measures would have temporarily delayed Freedom of Information Act law requirements and allowed the General Assembly to meet remotely during a pandemic.

Rep. Kelly Burke, D-Evergreen Park, sponsored Senate Bill 2135, which passed the House by a 66-44 vote shortly before 10 p.m. Saturday. It failed by one vote hours earlier before the controversial measures were removed. The measure was passed by the Senate, 36-19 on partisan lines, shortly before midnight and needs only a signature by the governor to become law.

The measure as passed would create a Restore Illinois Collaborative Commission to “participate in and provide input on plans to revive the various sectors of the state’s economy in the wake of the COVID-19 pandemic.”

Restore Illinois is Gov. J.B. Pritzker’s five-phase plan to reopen the state’s economy amid the COVID-19 pandemic, and Republicans have long been asking for more legislative input on the plan.

But Republicans called the commission as written in the bill “window dressing” that wouldn’t give lawmakers input in the reopening process.

“I am certainly interested in further collaboration with the governor, I think that’s important,” Rep. Ryan Spain, R-Peoria, said during a lengthy floor debate. “But I think it is an abdication of our duty as a Legislature to leave this special session with only creating a collaborative commission or what would essentially be a task force for recommendations.”

In the Senate, Sen. Jason Barickman, R-Bloomington, said the measure fell “wildly short” of actual oversight of the governor and his wide-reaching executive orders.

Per the bill, the commission would consist of appointed lawmakers in collaboration with the Department of Commerce and Economic Opportunity, which “may request meetings be convened to address revitalization efforts for the various sectors of the state’s economy.”

Those meetings may include public participation as determined by the commission.

DCEO would also be required to provide monthly reports to the General Assembly and members of the commission regarding “current and proposed” revitalization efforts. The first report would be due July 1 and include “applicable metrics that demonstrate progress on recovery efforts” and any other information requested by the commission.

The commission would consist of 14 members, with four House members appointed by the House speaker and four senators appointed by the Senate president. The Republican minority leaders in each chamber could each approve three members.

A controversial facet that was removed from the bill would have allowed, for the first time in state history, lawmakers to meet and vote remotely “in times of pestilence or an emergency resulting from the effects of enemy attack or threatened enemy attack.”

While Burke said the measure would be in effect only until June 2022 and would be applied only to “preserve the continuity of government” should disease or an attack make meeting impossible, she faced heated questioning, even from members of her own party. 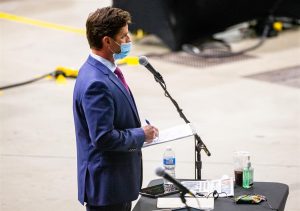 Rep. Ryan Spain, R-Peoria, asks questions during debate of SB 2135, a bill which makes changes to government operations due to the COVID-19 pandemic, during an extended session of the Illinois House of Representatives on Saturday, May 23 at the Bank of Springfield Center in Springfield. (Pool photo by Justin L. Fowler/The State Journal-Register)

Rep. Tim Butler, of Springfield, took particular exception, noting the body has met during the Civil War and any other number of obstacles. Having face-to-face back-and-forth “makes this whole process better,” and enables lawmakers to come together on difficult bills, he said.

“This is in my mind a very dangerous precedent to set when we start allowing remote voting for us,” Butler said.

After the measure was stripped, Rep. Ann Williams, D-Chicago, said the current pandemic demonstrated that lawmakers needed the flexibility to meet remotely in such a situation.

“We have failed to prepare ourselves,” she said.

The other provision that was removed would have extended deadlines for public bodies to respond to a Freedom of Information Act request until 30 days after the bill became law.

Burke said it was a measure to “balance” the public’s right to information with “practical difficulties” of understaffed public bodies during the pandemic.

Opponents argued some public information is now more important than ever as governments take unprecedented actions to fight the spread of disease.

During the earlier debate, the governor’s office released a statement saying it did not ask for such a measure, was opposed to it and would like it to be removed from the bill. They apparently got their wish, as it was ultimately removed.

There were a number of other changes contained in the sprawling bill, including changes to the Park District Aquarium and Museum Act affecting how many days a zoological park or museum must be open to the public without charge.

Another notable facet gives the secretary of state’s office emergency authority to extend deadlines for the remainder of any health-related declaration of disaster and up to 120 days after. The law would be on the books until Jan. 1, 2021.

The bill would also create a 10-person task force of members representing the Department of Insurance and the insurance industry to study business interruption insurance policies.

The group would study the impacts of the COVID-19 pandemic on businesses and the need for changes to business interruption insurance policies based on those impacts, including recommendations for legislation. The task force members would be unpaid and deliver a report to the governor and General Assembly by Dec. 31, 2020.

The bill also amended the Broadband Advisory Council Act, stating the council shall “study the goal of providing free access to all residents of this state to broadband service through the expansion of the state broadband competitive matching grant program.” An alternative goal is to study affordable access.

It would be due to report its findings on affordability and funding streams by January 2021.

The bill also would put into statute measures allowing remote notarization that were included in an executive order signed by Pritzker in response to the COVID-19 pandemic. The measures would be in place until 30 days after the governor’s disaster declaration is ended.