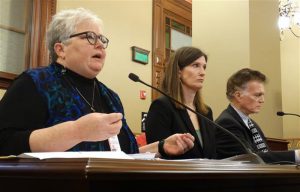 “Inspector Pope has proven to be a dedicated public servant representing the people of Illinois and their desire for a more ethical state government,” Illinois Senate Republican Leader Dan McConchie, R-Hawthorn Woods, said in a statement. “Her job was difficult in a state that has a history of legislator misconduct. I wish her well and look forward to helping find a successor to carry this important mission forward.”

Pope, who had held the job since December 2018, said in a resignation letter to members of the Legislative Ethics Commission, which oversees the inspector general, that she was frustrated by the unwillingness of lawmakers to enact ethics reform measures that would have given her office more independent authority.

“This past legislative session demonstrated true ethics reform is not a priority,” Pope wrote. “The LIG has no real power to effect change or shine a light on ethics violations. The position is essentially a paper tiger.”

The office of inspector general is overseen by an eight-member, bipartisan group of lawmakers known as the Legislative Ethics Commission, which must give its approval before the inspector general can launch an investigation.

During the spring legislative session, lawmakers passed an ethics bill, Senate Bill 539, which is awaiting Gov. J.B. Pritzker’s signature. It gives the inspector general independent authority to launch investigations, but only upon the filing of a formal complaint. It also makes a number of changes to financial disclosure requirements and limits the ability of lawmakers to leave office and immediately go to work as lobbyists.

However, the bill does not give the inspector general authority to issue subpoenas or release the results of an investigation without approval from a majority of the commissioners, powers that Pope had argued are needed for the office to be effective.

The bill also limits the inspector general’s jurisdiction to matters concerning a lawmaker’s public duties or use of state office or employment.

Asked about the bill during a news conference Thursday, July 15, Pritzker said it includes many provisions that he favors but conceded it does not go as far as he would have liked.

“And again, we’re gonna keep working on this,” he said. “This isn’t the end of this discussion, it’s the beginning. But this was a bipartisan effort. There were prosecutors who are in the legislature who were involved in the crafting of this ethics reform bill. So I agree that there’s more that needs to be done, but this is a decent beginning and I will continue to work with legislators to make sure that we get more done.”

“Our caucus has long supported her efforts,” Tracy said. “It is unfortunate that the majority legislative leaders did not make better use of her skills and her willingness to make some much-needed changes that would benefit all lawmakers. Ethics reform in Illinois has long been an ongoing challenge.”

Rep. Mark Batinick, R-Plainfield, said in a statement that Pope’s resignation letter “speaks to glaring issues that prevent this position from providing meaningful accountability to the General Assembly.”

“Illinoisans have paid the high price of corruption for far too long,” he said. “This resignation is a call to legislate true reforms that will allow future inspectors general to hold legislators accountable in our statehouse and end Illinois’ culture of corruption.”