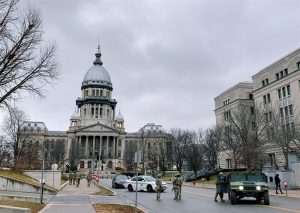 The Illinois State Capitol is pictured on a quiet afternoon Sunday, Jan. 17 in downtown Springfield. There were no protesters in sight for much of the day despite the heavy Illinois National Guard presence in the streets with military humvees and traffic blockades outside the Illinois Capitol. About 250 Illinois National Guard members were deployed to the Capitol as the FBI warned of armed planned protests at state capitals across the country over the weekend. (Capitol News photo)

SPRINGFIELD – While there have been no confirmed threats made against the Illinois Capitol, heightened security measures remain in place “out of an abundance of caution” after a quiet weekend in the capital city.

State officials said it will remain that way until sometime after the Wednesday, Jan. 20 inauguration of President-elect Joe Biden.

Following a riot at the U.S. capitol building on Jan. 6 and an FBI warning about possible armed protests around the nation in the lead-up to Biden’s inauguration, Gov. J.B. Pritzker activated 250 members of the Illinois National Guard Friday, Jan. 15. Their task is to support law enforcement’s efforts to secure the city.

“Following the violent siege at our nation’s Capitol and reports from federal law enforcement on threats to state capitols, I am bringing all resources to bear to protect our residents and our democratic process,” Pritzker said in a news release on Friday.

He also said Friday there were no specific threats necessitating the activation, other than the FBI’s Jan. 11 warning about possible armed protests in all 50 states.

“There is a general threat,” Pritzker said on Jan. 15. “There are flyers that have been put around the internet to have armed protesters show up at all 50 state capitols, and there’s one particular flyer that has all 50 state capitol addresses essentially going to everybody they can reach out to.”

All ground-floor windows and entrances at the Illinois Statehouse have been covered with plywood since Friday afternoon, while police closed surrounding streets to vehicle traffic over the weekend. Armored vehicles and uniformed soldiers were seen patrolling state buildings, including the Governor’s Mansion. The Guard troops are assisting the Illinois State Police, Secretary of State Police and Illinois Emergency Management Agency.

Fewer than five protestors who regularly attend events in Springfield without issue were seen on the Capitol Grounds Saturday, according to the State Journal-Register, and Henry Haupt, spokesman for the Secretary of State’s office, said in a statement Monday there were no reported incidents over the weekend.

“The Illinois Secretary of State Capitol Police remain vigilant to ensure the Capitol Complex is safe and secure,” Haupt said. “The Capitol Police continue to work with the Illinois State Police and other law enforcement entities to make sure the complex and surrounding area remain safe.”

Haupt said that he could not share specific staffing levels or security protocols, but reiterated that Capitol and Illinois State Police continue to monitor the situation closely.

As of Monday afternoon, National Guard troops and police officers remained stationed outside the Capitol Complex, the Governor’s Mansion and other nearby state buildings.

Illinois State Police Director Brendan Kelly said in a news release last week that the Illinois National Guard “will not interfere with peaceful protestors exercising their first amendment rights,” adding, “the role of the soldiers is to aide local authorities in enforcing street closures and designated perimeters.”

Lt. Col. Brad Leighton, a spokesman for the Illinois National Guard, said Monday that he expects troops to be on orders in support of law enforcement through the inauguration Wednesday.

“Beyond that, it is situation dependent,” Leighton said.

Last week, Pritzker also activated an additional 100 members of the Illinois National Guard to Washington, D.C. ahead of the inauguration at the request of the U.S. Department of Defense.

According to the Associated Press, about 25,000 National Guard members have been deployed to the nation’s capital for added security ahead of the Jan. 20th inauguration ceremony.