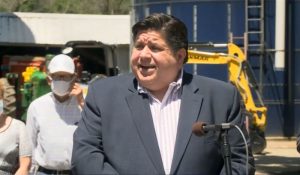 Gov. J.B. Pritzker speaks in the Henry County town of Geneseo Wednesday to announce the awarding of $50 million in grants to 28 projects aimed at expanding broadband internet access across the state. (Credit: Blueroomstream.com)

SPRINGFIELD – Gov. J.B. Pritzker Gov. J.B. Pritzker traveled to the Henry County town of Geneseo on Wednesday, June 24 to announce the awarding of $50 million in grants to 28 projects aimed at expanding broadband internet access across the state.

The $50 million is part of the “Connect Illinois” program that was included in the state’s recently-passed “Rebuild Illinois” capital improvements program. The state funds are being matched with more than $65 million in non-state funds for a total investment of over $115 million.

“Connect Illinois is about the right of all our communities to access health care, education, and economic opportunity — because in the 21st century, all those rights are tied to digital connectivity,” Pritzker said during an event at an event at Olson Acres Farms in Geneseo. “The unacceptable consequences of disparities in broadband access were clear before the COVID-19 pandemic — and over the last few months, we’ve seen firsthand what it means when a small business that had to close its doors has no online shop, what it means when an elderly couple has no safe way to get medical advice at a distance, what it means when a child has no ability to access homework assignments online.”

The Connect Illinois program calls for spending $420 million statewide for broadband expansion through 2024, including $20 million for the Illinois Century Network, a high-speed broadband network that serves K-12 and higher education institutions. The first round of grants that were announced Wednesday were awarded to 18 internet service providers, rural cooperatives, nonprofits and local governments.

For projects outside the Illinois Century Network, the program requires matching funds from grant recipients, which is expected to attract another $400 million.

“Reliable and affordable broadband service is a necessity for the success of agriculture and the quality of farm family life,” Richard Guebert Jr., president of the Illinois Farm Bureau, said in a statement. “The recent COVID-19 situation has further highlighted the importance of broadband connectivity. Improving broadband service will help revitalize rural Illinois and boost our economy.”

According to the Department of Commerce and Economic Opportunity, which administers the program, grant applications were reviewed and evaluated on a competitive basis, with proposals evaluated on factors such as broadband impact, matching funds, community support, project readiness and project sustainability.

DCEO said it expects to issue another round of Connect Illinois grants later this year.