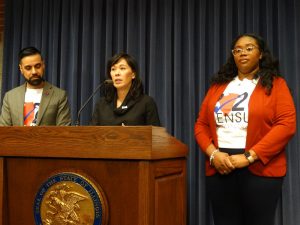 Illinois Department of Human Services Secretary Grace Hou (center) briefs reporters March 11 at the Capitol in Springfield about the start of the 2020 census. With Hou are the agency’s census co-directors Oswaldo Alvarez (left) and Marishonta Wilkerson. (Photo by Peter Hancock/Capitol News Illinois)

SPRINGFIELD — People throughout the United States can begin filling out their census forms online and state officials in Illinois are pulling out all the stops to make sure the state gets an accurate headcount.

Between March 12 and March 20, about 95 percent of all households in the country will receive a postcard in the mail inviting them to fill out their census form online or by phone in their language.

“The census is only nine questions — nine questions that impact every single person in your hometown, our state and across the country,” Grace Hou, secretary of the Illinois Department of Human Services, said during a news conference Wednesday. “These nine questions are important for your family, your neighbor, your city, your county and your state because your response determines Illinois’ infrastructure, meaning roads, hospitals, schools, grocery stores and fire stations.”

The U.S. Constitution requires that a census be taken every 10 years in order to apportion seats in Congress. Responding to the census is mandatory for all people living in the United States regardless of their citizenship, although the questionnaire does not ask about citizenship.

The census form asks the name of each person living in the household as of April 1, their dates of birth, ages, race and ethnicity, their relationships to each other and whether the home is occupied by the owners or renters.

In addition to allocating congressional seats, the federal government also uses that data as the basis for distributing hundreds of billions of dollars each year to states and local communities for things like education, health care, housing, highways and other infrastructure.

Recent census estimates have shown Illinois has been losing population and is at risk of losing at least one of its 18 congressional seats.

Because of that, the Illinois General Assembly last year put $29 million in the state budget for IDHS to help ensure an accurate count. Hou said $20 million of that has already been distributed in each of the state’s 102 counties to work with local organizations to maximize the census count.

Hou said IDHS was tasked with implementing the census in Illinois because, as the state’s main social service agency, it deals directly with “hard-to-count” populations, including the homeless.

Marishonta Wilkerson, one of the agency’s two census co-directors, said the YWCA has been designated to reach out to the homeless population in the Chicago area. Elsewhere in the state, she said, the agency is working with “regional intermediaries” to work with homeless shelters and other organizations to host “census nights” and provide internet access so those people can participate.

In previous years, people received a census form in the mail to be filled out, but this is the first year the U.S. Census Bureau has offered an online option. People will first receive a postcard in the mail inviting them to complete the form on the website, my2020census.gov.

That postcard will contain a 12-digit code that is used to verify a person’s address. But those who don’t receive a postcard, or who want to fill it out early, may select an option to enter their address manually or indicate that they do not have an address.

About a week later, people will receive a follow-up letter reminding them to complete the forms. They will receive a third reminder about a week after that. Then, anyone who still has not completed the form will receive another letter and a paper form to be filled out.