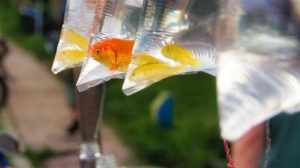 If a bill in the Illinois Senate becomes law, carnivals would no longer be allowed to award live animals — such as gold fish — as prizes. (Piqsels photo)

It is a mainstay of fairs and carnivals around the country: sink a ping pong ball into a fish bowl and win the goldfish swimming inside.

But if a bill in the Illinois Senate becomes law, carnivals would no longer be allowed to award live animals — such as fish, reptiles and hermit crabs — as prizes.

Illinois’ Humane Care for Animals Act already prohibits rabbits, ducklings and baby chicks as carnival prizes, but Senate Bill 2472 would expand the law’s protections to all animals — including the goldfish that winners can take home in a plastic bag.

Sen. Suzy Glowiak Hilton, a Democrat from Western Springs, introduced the bill with backing from the Humane Society of the United States.

“This isn’t just a ‘goldfish bill,’” she said. “Carnivals across the country give out other animals as prizes, specifically iguanas and other exotic reptiles.”

Glowiak Hilton said these reptiles can grow up to six feet long and become a burden to people who did not consider the specialized care the animals need.

“Many are simply abandoned and wreak havoc on our natural wildlife, or are turned into local animal control centers which are not equipped to handle them,” she said.

Her county, Cook, is one of at least four municipalities in Illinois that have banned live animals being used as prizes. The other three are Kane County, McHenry County and the city of St. Charles.

Illinois would join Iowa, Massachusetts, South Carolina and Vermont as states that outlaw all live animals as prizes, according to Fish Feel, an advocacy organization for the humane treatment of fish.

Glowiak Hilton’s bill applies only to carnivals. She plans to add an amendment to expand it to fairs.

Ken Tyrrell, president of the Illinois Association of Agricultural Fairs, says SB 2472 could affect the $170 million the Illinois fair industry contributes yearly to the state economy.

“That’s how these people make their money,” said Tyrrell, whose organization represents Illinois’ 104 county fairs, its two state fairs and hundreds of vendors.

“It affects the people that bring those games to fairs and it affects the fairs if they don’t have that,” he said.

Tyrell also says the bill erases the nostalgia of taking home a small pet from the local carnival.

“I’ve been in the fair business all my life, and people have a tendency to go back and play the same games every year,” he said. “If your small children look forward to going and playing the game where you have the possibility of winning a goldfish, they’re going to be very disappointed.”

Glowiak Hilton included a workaround in her bill, though. Carnivals can offer a coupon or voucher to winners so they can buy the animal from a licensed pet store.

“(SB 2472) will allow prize winners to go into a pet shop and fully understand the animal that they are going to be caring for,” she said.

“As far as nostalgia, this bill will create an even better experience for kids who win the coupons,” she added. “They will be able to go to a pet store with their parents and pick out exactly which animal they want.”

Tyrrell, however, said teaming up with pet stores is unrealistic for carnival workers who are constantly on the road.

“Carnival people travel all over the state and all over the country,” he said. “They don’t have those local associations to do that. That would be very difficult, time-consuming and expensive.”

SB 2472 was assigned to the Senate agriculture committee on Jan. 28. If it passes committee, the bill will go to the full Senate for a vote.