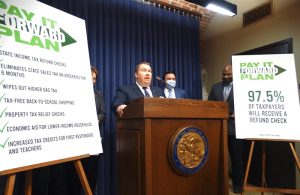 SPRINGFIELD – Democrats in the Illinois Senate on Friday, April 1 announced a $1.8 billion package of mostly temporary tax relief proposals that they hope to include in the Fiscal Year 2023 budget as the legislative session enters its final week.

The package is $800 million beyond the tax relief package proposed by Gov. J.B. Pritzker in his budget in February, although it includes many of the same tax reductions backed by the governor. The measures are contained in eight amendments to Senate Bill 1150.

The measures include direct checks to Illinoisans, a 10-day stay on taxes on schools supplies and qualifying clothing, and a six-month stay on the grocery tax and a motor fuel tax increase, among others.

Lawmakers are scheduled to adjourn on April 8, with the budget being the main proposal that still needs to be wrapped up. It needs approval from both chambers of the General Assembly and the governor.

Pritzker’s office said it will review the plan, while Republicans called it an election-year gimmick.

Sen. Elgie Sims, D-Chicago, one of the lead budgeteers in the Senate, said the tax relief was made possible by unspecified “additional revenues” made available in the budget.

Sims said only that the revenues were “identified from all sources” based on “a rebounding economy.”

Last month the Department of Revenue testified in committee that Illinois took in $4.6 billion more than expected in the current fiscal year that ends June 30, due largely to pandemic-related changes in consumer spending, although Pritzker included that revenue spike in his February budget plan.

IDOR also warned that the ongoing war in Ukraine could have an impact on revenues for the remainder of the current fiscal year and next. And some of the current-year surplus was spent on $1.4 billion in debt reduction in a measure passed last week that also addressed debt in the Unemployment Insurance Trust Fund.

Lawmakers said the hope would be that the checks would be distributed by September, although they said the date was based on immediate taxpayer relief, not on the fact that an election is upcoming in November.

Taxpayers would not need to take action to receive the checks. Anyone who is eligible based on their 2021 return would be sent a check.

Democrats are also proposing to increase the state Earned Income Tax Credit by a percentage point, raising it to 19 percent of the federal tax credit. The EITC is a credit available to low- and moderate-income households. It is a refundable credit, meaning those who qualify can receive a refund, even if the amount of the credit exceeds what they would otherwise owe in taxes.

Another measure gets rid of the sales tax on school supplies from Aug. 5 to Aug. 14 this year. The tax moratorium would also apply to qualifying clothing and footwear items up to $125 per item.

It would also give teachers a tax credit up to $300 beginning in tax year 2023, up from $250 the current tax year, for supplies purchased for their classrooms and a $500 credit for volunteer firefighters and EMS who held those positions for at least nine months in the tax year. The sponsors said those credits would be permanent.

“We look forward to reviewing this proposal,” Pritzker’s spokesperson said in a statement. “Our conversations with members of the General Assembly in both chambers have been productive, and we will continue to focus on delivering fiscally responsible relief for working families.”

“The Senate Democrats’ proposal appears to be just another election year stunt,” he said in a statement. “Under their plan, checks and relief will arrive right before the election and then will expire right after the election. This is not the real reform the people of this state want and need, and Illinoisans will see right through this disingenuous gimmick.”