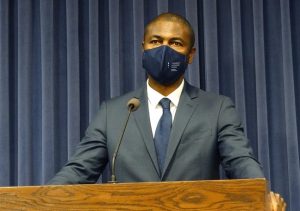 Rep. La Shawn Ford, D-Chicago, speaks at a news conference in May at the Illinois Capitol. Ford is sponsoring a bill that would allow inmates the right to vote. (Capitol News Illinois photo by Peter Hancock)

SPRINGFIELD – Illinois lawmakers could take up a bill later this month that would restore voting rights to convicted offenders serving time in county jails or state or federal prisons, according to the bill’s House sponsor.

Rep. La Shawn Ford, D-Chicago, said the bill almost came up for a vote during the final days of the regular session but was delayed due to some last-minute confusion.

“We were moving right ahead in the regular session,” he said during an interview Tuesday, June 8. “The bill hit the board and then there was some confusion within the (Democratic) caucus about whether or not there was an agreement to move forward or not. And so somehow, the speaker’s office called audible and said, ‘We gotta hold it for now until we could work things out, but things are worked out.”

Lawmakers wrapped up the bulk of their spring session on Tuesday, June 1, but they did not formally adjourn the session because negotiations were continuing on a massive energy bill that would put Illinois on a path to producing 100 percent of its electricity from renewable and carbon-free sources.

Gov. J.B. Pritzker said last week that all the parties in that discussion had agreed on a broad outline of the energy bill and that he expected the bill to be introduced soon. On Tuesday, the Senate announced it will return on Tuesday, June 15, to vote on the energy bill, and House Speaker Emanuel “Chris” Welch announced later Tuesday that the House would be in the following day, Wednesday, June 16.

“As I indicated before we adjourned on the final day of session, the House is expected to return next week on Wednesday, June 16 to take care of some final-action legislation,” Welch said in the statement.   “Items such as the energy proposal, unemployment insurance, and an elected school board for Chicago will be at the top of our list. We were able to accomplish big things this legislative session, and I’m eager to keep that spirit alive in a quick special session next week.”

Ford’s proposal to restore voting rights to convicted inmates, originally contained in House Bill 1872, was the subject of a committee hearing in March, but the committee never voted on it.

During that hearing, Rep. Patrick Windhorst, R-Metropolis, questioned whether it would require a constitutional amendment before it could take effect because the Illinois Constitution states that, “A person convicted of a felony, or otherwise under sentence in a correctional institution or jail, shall lose the right to vote, which right shall be restored not later than upon completion of his sentence.”

Advocates for the bill, however, noted that the words “not later than” suggest that the framers of the constitution anticipated that lawmakers might want to restore those voting rights earlier than upon completion of a sentence.

According to a Democratic analysis of the bill, the question of whether prisoners should be allowed to vote was the subject of considerable debate at the 1970 Constitutional Convention. While some delegates argued that allowing them to vote served a rehabilitative purpose, others argued losing the right to vote served the purpose of punishment. In the end, delegates chose to give lawmakers flexibility to decide the issue as public views on the issue evolved. 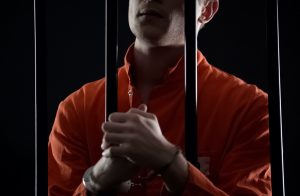 The proposal to restore voting rights to convicted inmates was the subject of an Illinois House committee hearing in March, but the committee never voted on it. During that hearing, the was question was raised on the need for a constitutional amendment before it could take effect.

In hopes of getting the bill through in the final days of the session, Ford introduced what is known as a “gut and replace” amendment to a Senate bill, SB 828, which passed committee last week before stalling on the floor.

Under current law, anyone who has been convicted of a crime and is serving a sentence of confinement is prohibited from voting. That includes people who are granted a furlough from prison or who are on a work release program.

Ford’s bill would delete that language and restore the right to vote to anyone who is otherwise eligible to vote and is incarcerated in a state, federal or juvenile detention facility, county jail, serving probation or parole, on work release or furlough, released on electronic monitoring, housed in a halfway house or other transition center, or who owes court fines or fees.

It also provides that inmates could register to vote using their last known address before they were sentenced and that their vote would count in the precinct where they last lived.

A subsequent amendment added to the bill calls for creating a task force that would include county clerks, the Illinois State Board of Elections, the Department of Corrections and a representative from a voting rights advocacy group to make recommendations on how to make voting accessible to incarcerated individuals. The bill would also give ISBE authority to adopt administrative rules, including emergency rules, to implement the bill.

Ford said his proposal follows on the heels of earlier legislation that assigns inmates to their last known home address for the purpose of drawing legislative and congressional district maps. That law will take effect following the 2030 census.

“And so, it’s only right that we make sure that they’re voting at that last known legal address,” he said. “Those individuals, they will return to those communities. They have families that they communicate with. They have children that are probably in schools. They have government that they should be involved in making decisions.”