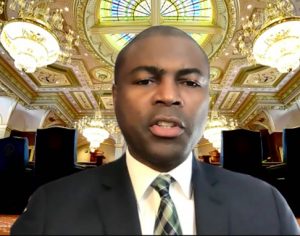 SPRINGFIELD – A bill that would repeal an existing law that prohibits prison inmates from voting is working its way through the General Assembly, although the chief sponsor of the bill says it’s only one part of a broader process to restore voting rights to prisoners.

House Bill 1872, sponsored by Rep. La Shawn Ford, D-Chicago, was the subject of an informational hearing in the House Ethics and Elections Committee Monday, March 22.

“This bill will not actually give the right to vote,” Ford said. “There’s a process by which that takes place.”

Under current law, no person who has been convicted of a crime in Illinois, any other state, or in a federal court who is serving a term of confinement in any penal institution is allowed to vote. That includes inmates who are on furlough or in a work-release program, but it does not include people who’ve been released on parole or people being held in pretrial detention.

Their right to vote is only restored once they have been released or paroled from prison.

Simply repealing that law, however, would not, by itself, restore the right to vote for inmates because Article 3, Section 2 of the Illinois Constitution also prohibits prison inmates from voting.

Per the constitution, “A person convicted of a felony, or otherwise under sentence in a correctional institution or jail, shall lose the right to vote, which right shall be restored not later than upon completion of his sentence.”

Still, voting rights advocates said it was important to begin the process by repealing the statute.

“HB 1872 would be a step toward healing from the racist history of felony disenfranchisement laws,” Ami Gandhi, Senior Counsel at Chicago lawyers committee for civil rights, said during the hearing. “Disenfranchising those community members convicted of a felony in the United States were enacted to serve the explicitly racist function of suppressing black voters. Today, such disenfranchisement laws that are still on the books continue to have that effect.”

Michael Ross, a Marine Corps veteran, said the issue was also important to veterans because 8-10 percent of the estimated 30,000 people held in state prisons have prior service in the armed forces.

“Veterans experiencing incarceration are currently being disenfranchised, unable to participate in elections, because Illinois does not allow people in prison to vote,” he said. “We are effectively telling veterans who have served this country and risked their lives to protect democracy that they can no longer participate in ours.”

No one spoke in opposition to the bill, but Republican Rep. Patrick Windhorst of Metropolis raised the question about whether a constitutional amendment would be needed to actually restore voting rights to inmates.

Gandhi replied that the constitutional prohibition on inmates voting was an important part of the discussion. But she added, “this bill is a necessary part of providing the right to vote for community members who are currently disenfranchised.”

Monday’s hearing was for informational purposes only, and the committee took no action on the bill.