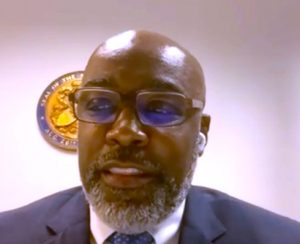 At a joint hearing of the state Senate Criminal Justice Committee and Special Committee on Public Safety Tuesday, Nov. 10 Raoul testified to lawmakers that the current metric for decertifying members of law enforcement leaves open too much room for misconduct, especially compared to the licensing and certification systems for other states.

Under current Illinois law, an officer must be convicted of a felony, a “decertifiable misdemeanor” such as criminal sex abuse, or commit perjury in a murder trial to be decertified.

“Through all these conversations, there were three overarching themes for enhancement,” Raoul said. “Ensuring uniformity across the state, increasing professionalism in law enforcement and increasing transparency.”

Under the current system, Raoul said, different local jurisdictions and departments in the state can differ dramatically in how they deal with officer misconduct.

The attorney general used Florida and Georgia as examples of robust decertification standards. Between 2009 and 2014, according to an Associated Press investigation, 2,125 officers in Florida and 2,800 officers in Georgia were decertified, many due to violations of moral clauses that included sexual misconduct on duty. In the same time period, Illinois decertified just 64 officers.

Raoul said he’s not “fishing to decertify officers,” but he and top law enforcement officials have concluded there is a need to broaden the range of offenses that can lead to decertification. Raoul said some sort of moral clause for “conduct unbecoming of an officer” should exist for offenses that do not rise to the level of prosecution but are concerning enough that an officer’s continued employment would pose a threat to the community and undermine trust and professionalism in law enforcement.

“Excessive use of force; dishonesty in reporting, investigating or charging crimes; intentionally tampering with body or dashcams, things of that nature,” Raoul said.

He told lawmakers the language should be precise and careful, as the state should not be “trying to supplant local authority” when it comes to disciplining officers but should collaborate with departments and give them more tools to deal with misconduct.

DuPage County State’s Attorney Bob Berlin, representing the State’s Attorneys Association, told lawmakers the fact that officers can leave a department due to misconduct and join a new one makes it difficult for prosecutors to obtain information on that officer’s history in subsequent investigations if the officer engages in further misconduct.

According to Berlin, a more robust certification system that keeps track of officers can help prevent bad actors from moving between departments and repeating behaviors and improve the quality of law enforcement in Illinois.

“We as prosecutors rely on the police to investigate crime and gather sufficient evidence so that we can bring charges and hold people accountable,” Berlin said. “But in order for the police to be successful they have to have the trust and confidence of the community, and if we do this right a state certification process, I believe, will result in more professional and better trained police departments. That’s going to make our communities safer.”

Jim Black, Crystal Lake police chief and ILACP president, said police chiefs and their departments’ rank-and-file officers have supported the use of body cameras, de-escalation training, stricter use of force requirements and other police reforms, but he advised caution when it comes to licensing standards.

“We are very much open to this conversation to strengthen decertification so that we can get rid of bad cops,” Black said in his testimony, stressing that law enforcement should remain involved in the process of creating new standards to prevent overreach and unintended consequences.

“I can’t speak statewide but I can tell you a number of my officers, from a morale standpoint, are not doing well,” Black said, referencing not just decertification but the national narrative surrounding law enforcement in the wake of highly publicized acts of police misconduct and brutality such as actions seen in video depicting the death of George Floyd. “They hear things and it’s hard to put on the uniform and go out there and put a smile on your face.”

State Sen. Elgie Sims, D-Chicago, who chaired the joint hearing, closed the session by telling witnesses and lawmakers the intent of the hearings and legislation is to bring law enforcement and the communities they serve closer together, and to protect the health and well-being of all.

“To achieve meaningful criminal justice reform, we must develop the appropriate solutions to prevent bad actors from continuing to work in law enforcement,” Sims said in a release. “We seek police reform that will not only hold officers accountable but maintain morale and help rebuild the fractured relationship between law enforcement and the communities they serve.”