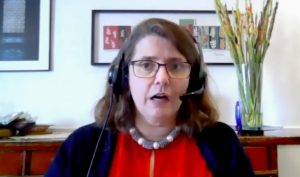 Qualified immunity isn’t an explicit federal statute or law but a legal doctrine established in its current form by the U.S. Supreme Court in the 1982 case Harlow v. Fitzgerald which grants government officials immunity from civil suits in the course of their duties. It is most often used in cases of alleged police misconduct or brutality.

At a joint hearing of the Senate Criminal Law and Public Safety committees on Thursday, Nov. 5, lawmakers heard testimony from legal experts, law enforcement and municipal officials on the impact of qualified immunity and its potential removal. The committee also discussed officer liability and amendments to the Uniform Peace Officers’ Disciplinary Act.

“Qualified immunity is often used as justification for excessive force and other forms of police misconduct,” Peters said in a release after the hearing. “If officers had to worry about facing consequences from their actions, maybe they would think twice before brutalizing our communities. We cannot and will not win real safety and justice until police officers are able to be held accountable for their actions.”

In order to lose qualified immunity, officers must violate “clearly established statutory or constitutional rights of which a reasonable person would have known.”

Supreme Court scholar Carolyn Shapiro, who has argued cases in the state and federal supreme courts, testified to lawmakers that this standard has meant that unless a nearly identical case of police misconduct has previously appeared before a court, officers could not have reasonably known their misconduct was violating the rights of the plaintiffs.

“Increasingly courts require more and more precise identity between the allegations that the plaintiffs are making and the pre-existing cases,” Shapiro said.

Shapiro offered two examples to the joint committee of when the lack of precedent has led to officers being shielded from civil liability for their misconduct.

The first was a case in the 9th U.S. Circuit Court of Appeals in which officers serving a search warrant in 2013 removed more than $200,000 of the homeowner’s possessions and underreported what was seized, allegedly keeping the difference for themselves. In subsequent litigation, the officers were granted qualified immunity on the grounds that there was no previous case or lawsuit that indicated the action would violate the homeowner’s constitutional rights, Shapiro said.

The second example was a case in the 11th U.S. Circuit Court of Appeals in which a Georgia sheriff’s deputy, while apprehending a criminal suspect during a chase that spilled onto private property where children were playing, held children at gunpoint. The deputy fired two errant shots at a dog belonging to one of the children, striking the 10-year-old owner of the dog once in the leg while he and the other kids laid face down on the deputy’s orders.

The appellate court granted the deputy qualified immunity from civil suit from the boy’s family on the grounds “that it was not clearly established it would be a constitutional violation to fire into a group of children,” Shapiro said.

According to Shapiro, there are exceptions to the rules on qualified immunity in cases where “the facts are so egregious that they say any reasonable officer would recognize the constitutional violation.”

The U.S. Supreme Court ruled on one such case Nov. 2, Taylor vs. Riojas, denying qualified immunity to corrections officers who left an inmate in a cell covered in feces for days before leaving him naked for several more days in a different cell kept at frigid temperatures.

The high court overturned a decision by the 5th U.S. Circuit Court of Appeals, which originally had granted the correctional officers qualified immunity on the grounds they didn’t have “‘fair warning’ that their specific acts were unconstitutional.”

Brad Cole, executive director of the Illinois Municipal League, testified before the joint committee Nov. 5 that ending qualified immunity was not the answer to curtailing police brutality and enacting police reform.

“We are aware of a growing movement to abolish or limit qualified immunity, in part a reaction to widely publicized instances of police misconduct,” Cole said. “While we’re interested in exploring and possibly supporting aspects of policing reforms, the weakening or elimination of qualified immunity is something the Illinois Municipal League does not support.”

According to Cole, ending qualified immunity would open up all government officials, not just police, to civil lawsuits, including those that are frivolous. Cole told lawmakers that taxpayers would ultimately foot the bill for frivolous lawsuits filed against city workers, county employees and police officers, which could create financial stresses for municipalities.

In written testimony submitted to the joint committee by IML, the organization called on the General Assembly to consider other methods of police reform brought up in previous hearings, such as limiting use of force, providing more departments with body cameras, establishing civilian review boards and statewide certification for officers.

Police Benevolent and Protective Association of Illinois Chief Legal Counsel Sean Smoot told lawmakers that most police officers and prosecutors don’t even know they have qualified immunity, so ending it wouldn’t prevent misconduct from bad actors.

“The solution is better training, more inclusion and more diversity within policing,” Smoot said. “My promise to this committee is, on behalf of my members, we will sit in a room and have difficult conversations like this one in an effort to improve and try to perfect the criminal justice system and the role police play in it.”

Addressing some of those claims, Shapiro cited the work of Joanna Schwartz, a UCLA law professor whose research covers qualified immunity.

According to Shapiro, Schwartz’s research shows that municipalities already bear the costs of settling lawsuits and settlements for police misconduct, and ending qualified immunity would help transfer liability from municipalities and governments to individuals. Schwartz’s work as cited by Shapiro also claims that ending qualified immunity would not negatively impact recruitment or retention of officers, or encourage officers to not fulfill their duties over fear of litigation.

Sen. Elgie Sims, D-Chicago, who also co-chaired the joint committee, addressed concerns and disputes between witnesses about the nature of the hearing and the reasons behind lawmakers’ decision to take a critical look at qualified immunity.

“These are complicated issues, complicated questions. This is never intended to be an adversarial process. The process is one where we intend to find the best policy for the communities we all protect, represent and serve,” he said.

In a news release sent Thursday, Nov. 5, Sims emphasized the need for police reform and how it is necessary for lawmakers to consider all their options.

“You cannot quantify the loss of trust between communities and law enforcement,” Sims said. “The ability to have a relationship between communities that is transparent, strong and built on trust is not a current reality, but it should be. These discussions are crucial to discover and implement meaningful solutions to rebuild trust between law enforcement and the people that they serve.”

Thursday’s joint hearing was prompted by the Illinois Legislative Black Caucus agenda which seeks “to end systemic racism in Illinois.” Sims, Peters and other members of caucus have been discussing criminal justice reform, the economy, health care and education with the goal of introducing legislation during the veto session tentatively scheduled for Nov. 17-19 and Dec. 1-3.