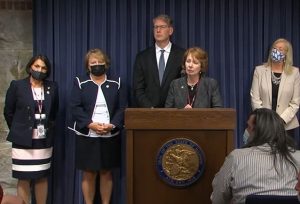 A bipartisan group of lawmakers introduce an ethics package Monday at the Illinois State Capitol. It passed the House late May 31, then the Senate after 1 a.m. on June 1 (Blueroomstream.com)

An amendment to Senate Bill 539, introduced by Sen. Ann Gillespie, D-Arlington Heights, passed with bipartisan approval despite House Republicans’ concerns that it was watered down.

“This legislation takes the first steps in addressing some of the most egregious scandals in our state’s history,” Gillespie said in a news conference Monday night, May 31. “While it won’t end corruption overnight, it closes many of the loopholes that have allowed bad actors to game the system for decades.”

The measure passed the House 113-5 Monday and the Senate unanimously early Tuesday morning, June 1. The bill will only need a signature from the governor to become law.

The bill creates a uniform requirement for statements of economic interests, requiring all candidates to disclose all personal assets and debts totaling over $10,000, all sources of income over $7,500 per year, as well as any personal relationships with individuals who serve in government or work as lobbyists.

The bill further expands limitations on fundraising efforts, preventing lawmakers from holding campaign fundraisers across the state on any day the General Assembly is in session, or on a day immediately preceding session.

The bill also prevents former lawmakers and officers of the executive branch from taking a lobbying job within six months of leaving their public position in what is typically referred to as a “revolving door.”

While Republicans were pushing for a restriction of at least one year on former lawmakers taking lobbying jobs, Sen. John Curran, R-Downers Grove, said the six-month restriction was an agreeable compromise.

“That’s as far as we could get our Democratic colleagues to come along, but it’s a step forward and it is better than the current status quo” Curran said in an interview.

Despite the bipartisan compromises in the package, some House Republicans said that the reforms don’t go far enough.

Rep. Blaine Wilhour, R-Beecher City, called the bill “an embarrassment,” saying it only takes “half measures” to address ethics reform.

“We talk about what needs to be done when we run for elections, and then we come here and we bring these half measures here,” Wilhour said. “What the taxpayers are demanding in this state is that we institute the strongest anti-corruption safeguards in the country to ensure that corrupt politicians never gain this kind of power over the taxpayers of Illinois again. This does not go far enough.”

The bill would also prevent lawmakers from collecting a full paycheck if they do not see their full term to completion. Instead, they would be paid on a prorated basis.

The bill further allows the Office of the Legislative Inspector General to launch an investigation into violations of the state’s election laws without approval of the Executive Ethics Commission.

The bill implements uniform standards for lobbyists of any level of government to register with the secretary of state’s office, but would exempt lobbyists from the city of Chicago from needing to register, as the city has its own registration process.

When asked if the exemption could open the door to loopholes in lobbying, Gillespie said the bill is better than current ethics laws in place.

“I think you’d be hard pressed to find a law that somebody doesn’t find a way to work around,” Gillespie said. “But this is a good solid step, this is extending a ban on lobbying far greater than it has been.”