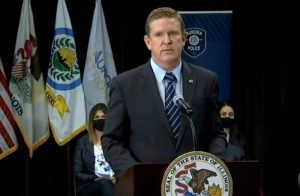 Illinois State Police Director Brendan Kelly speaks at an event at the Aurora Police Department Monday, Aug. 2 at which Gov. J.B. Pritzker signed a measure into law that will overhaul the state’s Firearm Owners Identification Card Act and other gun laws. (Blueroomstream.com)

Advocates for the new law — including Illinois State Police Director Brendan Kelly — hailed it as a measure that would provide the statutory backing and funding necessary to retrieve guns from those with revoked Firearm Owners Identification cards, while also streamlining the application and renewal process for law-abiding gun owners.

“I will never forget those images, nor will I ever forget the look in the eyes of the officers of the Aurora PD. I will forever live with the scars of that day,” Kelly said during the bill signing Monday, speaking of the Aurora shooting. “Nor can any of us forget the weaknesses in the firearm safety system that were exposed.”

Kristen Ziman, police chief in Aurora, recalled how the community was “ripped apart” by the shooting at Henry Pratt Company, calling it the “defining moment” in her career ahead of her scheduled retirement at the end of the week.

“What has kept me up at night since that horrific day is that the shooter used a gun he never should have had. He used that gun to steal these precious lives,” she said. “He had a revoked FOID card, which should have rendered him unable to continue owning a firearm, but a broken system caused the revocation to fall through the cracks.”

Her officers “immediately began working with lawmakers” to try to fix the system, she said.

Following the shooting, Kelly began a push to seek what he called “modernization” of the FOID system, while ISP also began serving more firearms enforcement details — more than 450 since the shooting, “with over 1,300 prohibited persons placed directly in compliance,” according to Kelly.

Kelly said those actions were made possible by stable state government budgets, and the pace of revocations could be accelerated with the new law’s dedicated revenue streams for those actions.

The new law, which was supported by gun reform advocates while the Illinois State Rifle Association remained neutral, creates a number of changes to gun statutes, including:

Within 90 days of the bill’s Jan. 1, 2022, effective date, State Police must create a “prohibited persons portal” to track people who have had their cards revoked or suspended. Law enforcement agencies, state’s attorneys and the attorney general would have access to that portal.