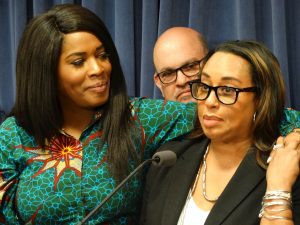 : Rep. Jehan Gordon-Booth (left) and Sen. Toi Hutchinson, key sponsors in their respective chambers of a bill to legalize recreational marijuana in Illinois, speak at a news conference May 30 at the Capitol in Springfield to discuss what passage of the bill would mean to minority communities, which they say have been unfairly targeted by law enforcement as part of the national war on drugs. Legalization was approved by the General Assembly before the end of the spring session and goes into effect Jan. 1. Hutchinson later stepped down from her Senate seat to become the senior advisor to the governor for cannabis control. (Capitol News Illinois Photo by Peter Hancock/Capitol News Illinois)

SPRINGFIELD — The state’s minimum wage will increase by $1 hourly, recreational marijuana will go on sale to those over 21 years of age, and some state taxes and licensing fees will increase when the calendar hits January.

The changes are among hundreds resulting from laws passed during a busy legislative session which adjourned in early June.

Marijuana Legalization: With the legalization of adult-use marijuana in the state, Illinois residents will be allowed to possess 30 grams of cannabis flower, 500 milligrams of a marijuana-infused product and five grams of cannabis concentrate. Non-residents can possess half those amounts.

Consumption of marijuana will still be banned in public places, however, unless a licensed marijuana facility or certain lounges obtain local government clearance for allowing use at their facilities.

Marijuana legalization will also provide for the expungement of low-level cannabis convictions and criminal records in the state, the first of which were filed in Chicago this month.

The licensing fee for a trailer weighing less than 3,000 pounds will increase to $118 from $18, with every weight class above that also seeing a $100 increase. 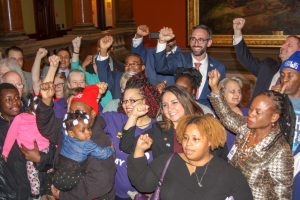 State Rep. Will Guzzardi joins activists on the Capitol rotunda after the bill to raise the state’s minimum wage to $15 by 2025 passed the Illinois House on Feb. 14. The legislation, sponsored by Guzzardi, a Chicago Democrat, passed along partisan lines 69-47-1. It had previously been approved by the Senate, and was signed into law by Gov. J.B. Pritzker on Feb. 19. The law goes into effect with the first of multiple rate increases Jan. 1. (Photo by Jerry Nowicki/Capitol News Illinois)

The Illinois Senate Democratic and Republican caucuses have each compiled lists of new laws available at their respective websites, illinoissenatedemocrats.com and senategop.state.il.us.