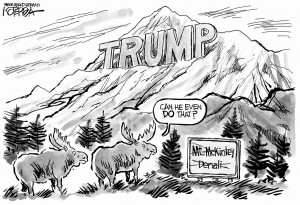 The rise of Donald Trump is, in part, a function of a vacuum.

He is thriving in a Republican field that is large, talented and, so far, underwhelming. To paraphrase Bruce Springsteen, there’s 17 candidates and nothing on. Except Donald Trump.

Now, this has much to do with the media, and with Trump’s unique qualities as a showman. He has the advantage of not caring about anything, apparently — the facts, his reputation or, ultimately, winning the presidency. In consequence, he is a free man.

Yet no speech, no policy proposal, no argument, nothing from the other candidates has come close to capturing the imagination of voters, giving Trump the space to loom all the larger.

The weakness starts at the top, or what was supposed to be the top. Jeb Bush’s “shock and awe” has turned into getting sand kicked on him at the beach by a loudmouth and bully. It’s not just that Bush is trailing Trump badly in the polls; he has acceded to the terms of the debate being set by the mogul.

In the argument with Trump over mass deportation, clearly Bush is right. But the split screen with Trump doesn’t necessarily do him any favors. Trump is such a forceful communicator that he comes off as some sort of throwback alpha male, whereas Bush is such an earnest wonk, he looks and sounds like a sensitive dad from a contemporary sitcom. It’s like watching a WWE wrestler get a stern talking to from Ned Flanders.

Scott Walker, in contrast, had a surge early in the campaign. It dissipated over time when his limited preparation on national issues didn’t match his outsized early press exposure. A so-so debate performance and the rise of Trump have continued his long fade to middle of the pack in the latest early state polling. Who could have predicted that the Midwestern candidate who tells stories about buying shirts for $1 at Kohl’s would have to play populist catch-up with the New York billionaire who travels by eponymous helicopter?

As for Marco Rubio, for whom expectations have been so high, he has been the least reactive to Trump. His campaign is still betting on the long game. It believes his talent will tell over time, but he doesn’t have a natural geographic or ideological base.

Ted Cruz may be benefiting most from the Trump surge in his strategic positioning. He has a cogent theory of the case, which is that if he is nice to Trump — and the other outsider candidates — he eventually can inherent his supporters. This makes intuitive sense, although Cruz — exceedingly careful in crafting his words and in calculating his interest — is hardly a natural anti-politician.

It is still early, of course. The rules of gravity say Trump will come back down to earth. The media interest that is so intense now could burn out. His lack of seriousness should be a drag over time.

Even if he fades, though, someone else will have to fill the screen. To this point, no one else has been big or vivid enough to do it.

— Opinion: The GOP Field That Failed —