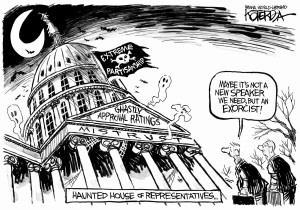 At least they aren’t brawling the way they do in the South Korean parliament — at least not yet.

House Republicans have over the past month seen their speaker, John Boehner, announce his imminent resignation under pressure and his heir apparent, Kevin McCarthy, suddenly give up on trying to succeed him — all while the party enjoys a comfortable majority and faces no external threat from Democrats.

With McCarthy, the current majority leader, shocking the political world by giving up his speaker bid, it’s not clear who can pick up the pieces. Some even speculate (although this is far-fetched) that Republicans will have to go to Democrats to forge a bipartisan coalition to fill the office, which would be a humbling concession that Republicans aren’t capable of governing the House on their own.

McCarthy is a pol’s pol who has good personal relations with other Republicans. He had a strong majority of the caucus backing him for speaker, but that wasn’t enough. He needed to get 218 votes on the House floor, a threshold that gave the several dozen members of the conservative House Freedom Caucus the ability to block him. It is this blocking power that the group has used again and again in legislative fights to frustrate the leadership. The right made Speaker John Boehner miserable, and ultimately ousted him in a demonstration of the power of a determined legislative faction.

No one is blameless in the House Republican civil war. The leadership is so unpopular with the grass roots because it has been unimaginative and timid, and the right of the caucus is correct to want to prod and challenge it.

Of course, there are limits to what even the shrewdest congressional leadership can achieve when the other party controls the White House, but House GOP leaders never advanced a substantive alternative agenda on major issues and weren’t willing to push the envelope in their fight with the president over his executive abuses. Both the House and Senate leadership were mostly content to restore “regular order,” a priority that could inspire only a few subcommittee chairmen.

On the other hand, the right in the House has had a clearer view of what it opposes than of what it supports, and often has seemed willing to burn the place down in the cause of symbolic purity.

We’re still a long way from the sort of chaos that gripped the House in 1855, when the politics of slavery scrambled congressional politics such that it took months and more than 100 ballots to get a new speaker. Eventually, someone among House Republicans will have the credibility and creativity to get to 218, perhaps when exhaustion with the internecine warfare takes hold.

One only hopes that no one starts throwing chairs before then.