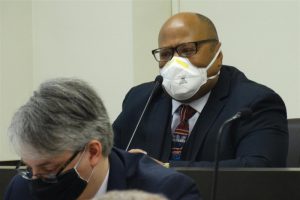 State Rep. Andre Thapedi, D-Chicago, questions representatives of the Illinois State Board of Education at a hearing of the Joint Committee on Administrative Rules Wednesday, Feb. 17 in Springfield. (Capitol News Illinois photo by Peter Hancock)

SPRINGFIELD – A legislative panel on Wednesday, Feb. 17 allowed the Illinois State Board of Education to move forward with new rules that call on colleges and universities in the state to change the way prospective teachers and administrators are trained in order to make them more accommodating to diverse students.

On a party-line vote, the Joint Committee on Administrative Rules, or JCAR, declined to block the new “Culturally Responsive Teaching and Leading Standards” from going into effect, despite objections by Republicans who argued the rules would ultimately require licensed teachers and administrators to adhere to a particular political ideology.

Specifically, the new standards, which will take effect in 2025, define a culturally responsive educator as, among other things, one who will “critically think about the institutions in which they find themselves, working to reform these institutions whenever and wherever necessary,” as well as one who will “assess how their biases and perceptions affect their teaching practice and how they access tools to mitigate their own behavior (racism, sexism, homophobia, unearned privilege, Eurocentrism, etc.).”

“Culturally responsive teachers and leaders understand that there are systems in our society that create and reinforce inequities, thereby creating oppressive conditions,” the standards state. “Educators work actively against these systems in their everyday roles in educational institutions.”

“So I do believe that what you’re doing is you’re taking teachers who may object to some of the things that are in this rule, and thus are saying that their inability or unwillingness to abide by this (is) making them, in effect, incompetent,” Reick said.

But Amanda Elliott, executive director of legislative affairs for the state board, said the new rules do not change the way licensed teachers or administrators are evaluated, only the way they are trained in schools of education.

“Again, these are for educator preparation programs, not aimed at school districts,” she said. “And it’s about not the personally-held beliefs or values of teachers that may be in the classroom, but making sure that they are welcoming to all students, regardless of their background, and also able to adapt material as necessary to meet those needs.”

Responding to questions from Democratic Rep. Andre Thapedi, of Chicago, Elliott explained that the process of drafting the standards began in 2017, during former Republican Gov. Bruce Rauner’s administration. It started with the state board putting together a leadership team to meet with education officials from other states. Later, the board put together a task force to come up with the actual rules.

Elliott noted that the proposed rules were amended several times in response to public comment as well as questions and comments from legislators.

Thapedi said he had asked for the background behind the rules, “because apparently there’s some misinformation out there about what this rule actually does, what the intent of the rule is, and more specifically, more relevant to what JCAR does, the statutory authority for the promulgation of this rule.”

But Sen. Sue Rezin, R-Morris, noted that the task force as a whole appeared to have a liberal tilt.

“I can say that we did not ask political affiliation when individuals joined the group,” Elliot replied. “I think there’s always room for additional perspectives. And we’re looking to expand the group as we, hopefully after today, can move forward with implementation.”

JCAR is a 12-member committee that is evenly divided between Republicans and Democrats, and between House and Senate members. Its main purpose is to review proposed rules from administrative agencies to make sure they are consistent with the legislative intent behind the statutes that authorize them.

Reick offered a motion to object to the rules on the basis that they did not clearly spell out how teacher preparation programs are to implement them. But such a motion requires a two-thirds majority, or eight votes on the committee, and it failed on a party-line vote of 6-5, with one Democrat, Senate Majority Leader Kimberly Lightford of Maywood absent.