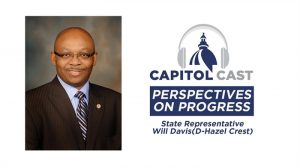 SPRINGFIELD — For veteran state Rep. Will Davis, D-Hazel Crest, filing legislation is often a way to start a conversation about racial justice in the Illinois General Assembly.

“As a legislator, I always look to my tools, and my tool is legislation — bringing the conversation,” he said. “What I’ve learned is that only when you file legislation, do you get the conversation. Because you can talk and as long as it doesn’t materialize into anything, everybody’s okay, or certain people are okay. But when you file it, then they know you’re serious. And then they really want to talk to you.”

Davis shared his thoughts for Capitol News Illinois’ “Perspectives on Progress” series, which is a collection of conversations on race in Illinois with state leaders.

Davis said he would like to see Gov. J.B. Pritzker engage the entire Illinois Legislative Black Caucus on issues of race to help chart a path forward.

He also said more resources will be needed in Black communities trying to rebuild from COVID-19 and recent property destruction that occurred from civil unrest sparked by video of a white police officer killing an unarmed Black man, George Floyd, in Minneapolis on May 25.

On the topic of looting and property destruction, he said the incidents don’t define the protests, but they do make conversations about moving forward more difficult.

“And the reality is that those actions don’t make this conversation any easier,” he said. “Because those who feel that we are a certain type of people say, ‘look, see, there you go again.’ You know, that’s what they do…What we cannot lose sight of is what started all of this…And it started with the actions of a police officer who appears overstepped his authority in terms of trying to subdue someone.”

He said those participating in property destruction take away from the message that needs to be heard.

“It’s just that — feelings of déjà vu, and you’re exhausted because you know what’s coming afterwards,” he said. “The peaceful protest, bringing truth to power, and just really acknowledging, you know, the challenges that we have in this country as well. But then you’re also going to get tired of the negative side. Again, that’s the opportunists.”

He said training reforms for officers and other state mandates are needed, but the state will also have to strictly enforce them if they are to be effective.

Black caucus members, he said, will continue to use their platform as state budget negotiators to continue to direct resources to communities in need as well.

“As legislators, we’re going to try to use our tools through legislation, we’re going to try to use the state budget to direct priorities, direct money to where those dollars are needed,” he said. “And again, I’m not saying that it’s all about just what we need. There are other needs throughout the state that don’t involve communities of color. And I’m not discounting them in any way right now. Definitely not discounting, but we see where the urgency, we see where it’s truly needed right now.”