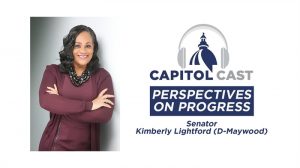 SPRINGFIELD — Sen. Kimberly Lightford said she hopes the demonstrations held across Illinois will galvanize residents and the Legislature into enacting a tangible end to institutional racism.

The senator, a Democrat from Maywood, has a list of initiatives she believes the General Assembly should pass. The first step is harnessing the “beginning of a shift in the mindset” occurring right now.

Lightford, the first black woman to serve as the Senate’s majority leader, spoke with Capitol News Illinois for a podcast series called “Perspectives on Progress.” She said policy changes should be “sustainable” and “take a different approach” to how government prioritizes communities.

Lightford said her agenda includes strategies to empower communities of color to become independent from government, because “the best way to help a person is to allow them to work for themselves.”

“Barriers” to banking, financial resources and voting should be removed and employment opportunities should be coupled with skill-building workshops.

Lightford also said lawmakers do not always “understand the importance of what the black community needs, or minority communities overall.” Any laws addressing home foreclosures, mental health or violence prevention need to be connected with an oversight authority, she said.

And just as important as legislative measures are societal changes, she said. Illinoisans must break down those “barriers to really loving each other and living free and having honest conversations and accepting each other’s cultures,” Lightford said.

She added she had never seen the level of public outcry in Illinois that was visible in response to the death of George Floyd – an unarmed black man who was killed by a white Minneapolis police officer on May 25.

“I’ve seen the support and the understanding and the caring that is coming from all nationalities and all across the country,” Lightford said. “It’s so beautiful. It’s moving, …and I’m appreciative. I’m just hoping that they stay with us when we begin to push these policy initiatives and push for support.”

It is the people, the senator added, who are “completely inspirational.”

Capitol News Illinois’ Perspectives on Progress series is a collection of conversations aimed at discussing race in Illinois and the U.S. The series has thus far included the voices of black legislators in Illinois, including their views on unrest in the U.S. and how they believe Illinois can move forward. Episodes can be found at capitolnewsillinois.com.