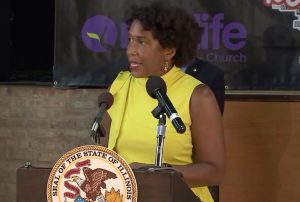 Lt. Gov. Juliana Stratton speaks to the media regarding a new four-year plan to overhaul the state’s juvenile justice system on Friday, July 31 in Chicago. Stratton was joined at the event by Gov. J.B. Pritzker. (Photo courtesy of Gov. Pritzker Facebook)

SPRINGFIELD – The state of Illinois plans to begin placing minors in the justice system in smaller, community-based detention centers that focus more on providing intervention services and education.

A four-year blueprint split into three phases would move the Department of Juvenile Justice from “an antiquated theory of juvenile incarceration” in larger holding facilities into what the governor called a “21st century transformative model.”

Phase 1 is to start immediately with increased investment in community-based interventions and re-entry programs. Phase 2, starting next year, involves housing incarcerated youths in smaller, dorm-like facilities closer to their homes. Phase 3, also set to begin next year, would involve continued investment into communities and the transfer of prison-like facilities from DJJ to the Illinois Department of Corrections for housing overflow adult prison populations.

According to Pritzker, data has shown for decades the Illinois juvenile justice system is too punitive and discriminatory. While the total number of youths in custody has decreased from 282 in January 2019 to 97 by June 2020, the governor said Black children still make up more than 70 percent of those in DJJ care despite being only 15 percent of the under-18 population in Illinois.

Outside of claims of systemic racism, another point of contention is that the current system just doesn’t work. Pritzker said that between 2010 and 2018, an average of 55 percent of juvenile offenders released from DJJ custody eventually returned.

According to DJJ’s seven-page overview, a benefit of the transformative model would be increased positive outcomes while also saving DJJ and IDOC money.

“This model does not starve the children or employees in the juvenile justice system of resources,” DJJ Director Heidi Mueller said. “Instead, this model recognizes that the people we serve matter, and the people who are doing the serving matter.”

A theme that permeated throughout the news conference was that the current model of criminal justice attempts to treat the symptoms of crime. The new model Pritzker and the DJJ are proposing will aim to tackle the roots of crime.

Historically, Black communities in Illinois have been especially impacted by negative factors that increase the crime rate like discriminatory policies, segregation, disinvestment and gun violence.

“I’m especially excited about how this model will intentionally invest in victim services in communities hit hardest by violence, acknowledging that our current system does little to directly support victims, and that more than 90 percent of the kids in our system were victims before they were offenders,” Mueller said.

Pritzker’s announcement comes a day after the national organizations Youth Correctional Leaders for Justice and Fair Prosecution of Youth released a joint statement condemning the use of youth prisons.

Criminal justice groups in the state, including the ACLU of Illinois, the Children and Family Justice Center at the Northwestern Pritzker School of Law, the Illinois Justice Project, and the John Howard Association of Illinois released a joint statement July 31 commending Pritzker, Stratton and Mueller “on this important reform of the juvenile justice system in Illinois.”

The JHA, an independent watchdog group that acts as oversight for Illinois prisons, went a step further and released an additional statement on its own praising the change and adding that it hopes “we will apply these same principles to the adult prison system.”

The transformation of the juvenile justice system in Illinois is part of a broader push by Pritzker’s administration to institute social justice reforms, culminating in the Justice, Equity, and Opportunity Initiative established by executive order last year that coordinates justice reform through Stratton’s office.

Other initiatives that have had potentially wide-ranging socioeconomic consequences for Illinois include legalized adult-use cannabis, social equity licenses for dispensaries and equity grants for investing in disadvantaged communities.

“We cannot continue to be a country that criminalizes the children who need the most help,” Stratton said. “We need to help our young people heal, to redirect their energy to realize their potential and foster their dreams.”