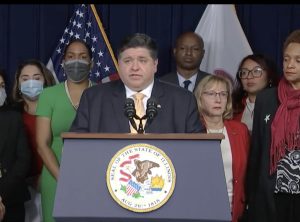 Gov. J. B. Pritzker and Illinois Democratic lawmakers vowed to protect abortion rights at a Tuesday, May 3 news conference in Chicago. The news conference was in response to a May 2 evening report from Politico that outlined a leaked draft decision from the U.S. Supreme Court that would strike down Roe v. Wade. (Illinois.gov)

SPRINGFIELD – Gov. J.B. Pritzker and Illinois Democrats warned of an “end to the constitutional right to privacy” if a leaked U.S. Supreme Court decision overturning the 1973 landmark decision in Roe v. Wade becomes finalized as precedent.

“It means women who lose access to the full suite of medical advances that give them choices in how and when they want to start a family are at risk,” Pritzker said at a morning news conference in Chicago.

At the same time, however, the Democrats touted a recent string of Illinois laws aimed at protecting the access to an abortion for Illinoisans and those visiting the state to receive reproductive health care.

The news conference was called in response to a Monday evening report from Politico that outlined the leaked draft decision that would strike down Roe v. Wade, a decision which has protected abortion rights as constitutional rights for nearly five decades.

Justice Samuel Alito wrote in the majority opinion that “Roe was egregiously wrong from the start” and the issue of regulating abortion must be returned to the states.

Pritzker said that if the ruling stands as a reversal of 50 years of settled law, the implications on privacy and health care access could be dire.

Advocates said overturning Roe would be devastating for millions who will be forced into unwanted pregnancies and that it will lead to illegal alternatives that could put the mother’s life at risk.

Rep. Delia Ramirez, D-Chicago, said she worries that Black and Latino communities, which are already disproportionately impacted by lack of health care access, will be targeted and criminalized by anti-abortion laws.

“I mourn with the young people who may grow up in a country where our laws tell them that they have no autonomy over their bodies,” Ramirez said.

Rep. Kelly Cassidy said uprooting the precedent in Roe could affect interpretations of law regarding birth control and marriage equality.

“I feel like my life and my family’s life is teetering at the top of a Jenga tower that we’re watching crash in real time,” Cassidy, D-Chicago, said. “My marriage, my children’s relationship with their other mother, my bodily autonomy, is all in the crosshairs.”

While Democrats said overturning Roe would mark a “dark day in our nation’s history,” they also credited their party for creating a “forcefield” to guarantee a women’s right to reproductive health care in Illinois.

In 2019, Pritzker signed the Reproductive Health Act enshrining in state law the fundamental right to an abortion. In December 2021, he signed a law ending a requirement that doctors must notify parents of a minor seeking an abortion 48 hours prior to the procedure.

House Speaker Emanuel “Chris” Welch, D-Hillside, criticized Republicans for implying that “this wasn’t a serious matter” when they voted against abortion protections previously. On Tuesday, he said, the GOP was “eerily quiet” amid the major news.

While GOP statements to the media were sparse, some of the Republicans vying to unseat Pritzker spoke out on the issue.

GOP governor candidate and current state Sen. Darren Bailey, of Xenia, said in statement that he is “proudly pro-life” and that if elected governor, he will promote policies and groups that would empower women with “real options.” While he didn’t directly comment on the draft opinion, he said he would try to scale back recent changes made by Democrats.

“As governor, my focus will be restoring parental notification, ending taxpayer-funded abortion, and prioritizing and ensuring viable options that save lives and support women and families before, during and after pregnancy,” Bailey said.

Bailey has received endorsements by the Illinois Federation for Right to Life, Illinois Citizens for Life and Illinois Family Action.

GOP governor candidate Jesse Sullivan said in a news release under the headline “prayer works” that he is “overjoyed at what could be a generational change in the soul of our country.”

He noted that with the Supreme Court decision putting power back in the hands of the state, it “threatens to make Illinois’s current abortion laws even more heinous” and called for the end of late-term, partial-birth abortions and rollbacks of recent Illinois laws. 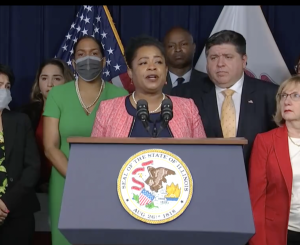 State Rep. Sonya Harper speaks at a Tuesday, May 3 news conference with other Illinois lawmakers in reacting to the Politico report that outlined a leaked draft decision from the U.S. Supreme Court that would strike down Roe v. Wade. (Illinois.gov)

Richard Irvin, the Aurora mayor who has received the financial backing of megadonor Ken Griffin, was not among those issuing a statement, with his campaign declining to do so until a final decision is rendered by the court. His running mate, Rep. Avery Bourne, R-Morrisonville, is one of the staunchest anti-abortion lawmakers in the General Assembly.

Amy Gehrke, executive director of Illinois Right to Life, said in a news release that the organization will focus on “restoring protection to the most vulnerable” and ensuring that mothers “have the resources they need to choose life as well as parent confidently.”

Jennifer Welch, president and CEO of Planned Parenthood of Illinois, released a statement saying that while this decision comes as no surprise, the organization will continue to fight so everyone can access the fundamental reproductive health care they need.

In January, a regional logistics center opened in a Planned Parenthood clinic in Fairview Heights to make abortion care more accessible. The center is operated by Planned Parenthood and the Granite City-based Hope Clinic for Women.

Private funds are used to pay for travel and lodging arrangements and connect patients with existing resources. There is no income or distance requirement to access RLC services.

Planned Parenthood projected that an additional 14,000 women from Arkansas, Kentucky, Missouri, Oklahoma and Tennessee would likely travel to southern Illinois for abortion care if Roe v. Wade is overturned.

“We will fight like hell, not just for the women of Illinois, but for every person in our state and every person across this nation who believes not in limiting civil rights and human rights, but expanding them,” Pritzker said.